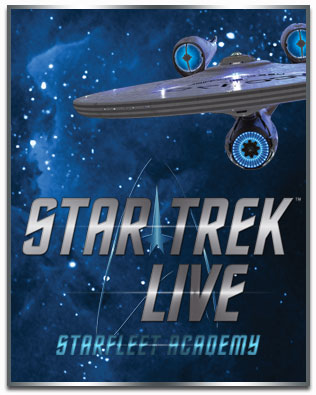 In the show, the audience portrays new Starfleet cadets assembled for the first day at the Starfleet Academy. As we are introduced to the Academy, the Earth itself comes under attack from a renegade Romulan, leaving the fate of the future itself in the hands of our cadets. The new cadets will have to learn the intricacies of living and working in space, modern space travel and the latest in communication and technology.

“Star Trek Live could not have found a better home for its world debut,” said Star Trek Live Producer Leonard Lipes. “Based on the storyline and the fiction-to-reality show concept, both NASA and the Kennedy Space Center Visitor Complex were clearly our first choice of partners for this co-branding opportunity allowing visitors to follow in the footsteps of Star Trek’s iconic characters, to boldly go where no one has gone before.”

“This show offers all the excitement, ingenuity and of course, logic, that Star Trek fans have come to expect with an added bonus of learning something along the way.” said Liz Kalodner, executive vice president and general manager of CBS Consumer Products.

will you do a video on this and put it on youtube? It sounds cool.