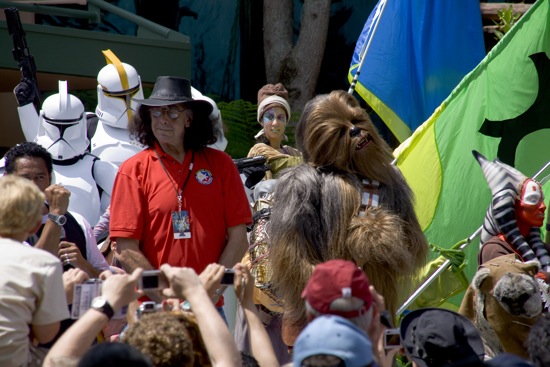 Peter Mayhew poses with the character he portrayed in the movies, Chewbacca at last year’s event.

With the Star Tours thrill attraction serving as the centerpiece of the celebration, the event fills Hollywood Studios with more than 50 Star Wars characters from the entire saga, including Darth Vader, Darth Maul, Greedo, Queen Amidala, Anakin Skywalker, R2-D2, Chewbacca, Twi’leks, Rodians and every hero, heroine, droid and villain in between. Jedi Mickey Mouse has even been known to make an appearance.

Star Wars Weekends features a variety of activities such as: “Behind the Force,” an insider’s look at the making of the films; “Padawan Mind Challenge,” allowing kids under 12 to test their wits before the Jedi Council; “Legends of the Force,” a motorcade featuring favorite Star Wars celebrities; and “Jedi Training Academy,” where young Jedi-wannabes can learn lightsaber battle techniques and test their newfound skills against Darth Vader or Darth Maul.

Star Wars celebrities are on hand each weekend for photos, Q&A, autograph sessions and Hollywood-style motorcades. All four weekends, Star Wars actor Warwick Davis (who portrayed “Wicket the Ewok”) will serve as celebrity emcee and host of the event.

Other celebrities scheduled to appear include (subject to change):

Everything is Christmas! – The Attractions Podcast