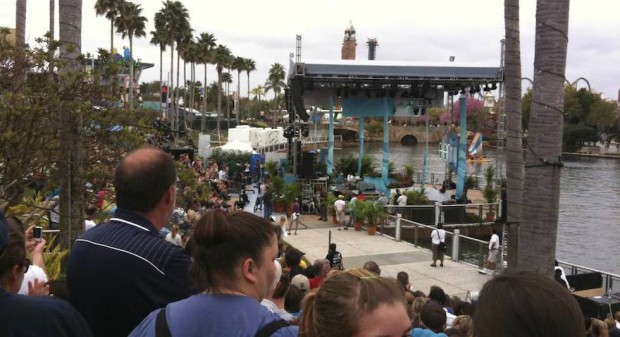 Universal Orlando continues to be a working production studio, and the latest show to tape at the resort features comedian Steve Harvey.

Harvey’s daytime talk show, entitled “Steve Harvey”, will be hitting the road for the first time in its three-season history to tape five shows at Universal’s CityWalk Lagoon Stage from Nov. 4 to 6, 2014 with the episodes airing on television Nov. 17 to 21, 2014.

Several segments for the show will be taped here, including “Ask Steve,” “America’s Hottest Bachelors: The Men of Florida” and “Family Bucket List.” Famous families will also gather to take part in a special “Family Feud” segment.

This won’t be Steve Harvey’s first time filming a show at Universal. Back in 2010, Harvey taped his first season hosting the game show “Family Feud” in a soundstage at Universal Studios Florida. In past years, “The Ellen DeGeneres Show” has also filmed live shows on the CityWalk Lagoon Stage.

Guests can sign up to be part of the live audience for the tapings at SteveHarveyTV.com.

The Steve Harvey Show airs in Orlando at 9 a.m. weekdays on WFTV Channel 9.