Email
Share
Pin55
Tweet
Share87
142 Shares
Last week, Walt Disney World debuted Miss Adventure Falls at Typhoon Lagoon. Not only does this new raft ride add another family-friendly attraction to Disney’s most popular water park, but it expands on the long-running mythology that has been built up around the Society of Explorers and Adventurers. The Society — whose imaginary members include Harrison Hightower III, Lord Henry Mystic, Barnabas T. Bullion, Mary Oceaneer, and Dr. Albert Falls — has now been woven into the backstory of Disney rides and restaurants across the globe. If you aren’t already familiar with how the fictional S.E.A. ties together Disney attractions from around the world, here is an introduction to the story behind Disney’s Society of Explorers and Adventurers.

It’s been almost a decade since the Adventurers Club at Walt Disney World’s Pleasure Island closed to the public, but the interactive attraction still holds a special place in the hearts of many Disney fans. The haunt of eccentric characters like Hathaway Brown and Samantha Sterling originally opened in 1989, long before Disney’s Imagineers dreamed up the Society of Explorers and Adventurers. However, the famed Club — which once stood where Disney Springs’ new Edison restaurant is being constructed — clearly served as the inspiration for S.E.A., and elements of the attraction’s decor and storyline have subsequently spread to other Society-related establishments across the globe.

The Society of Explorers and Adventurers made its first in-park appearance with the 2001 opening of Tokyo DisneySea. Fortress Explorations, an opening-day attraction located in the park’s Mediterranean Harbor area, is a walkthrough experience that challenges guests to solve a series of challenges in order to join the S.E.A., whose backstory is spelled out on provided maps: 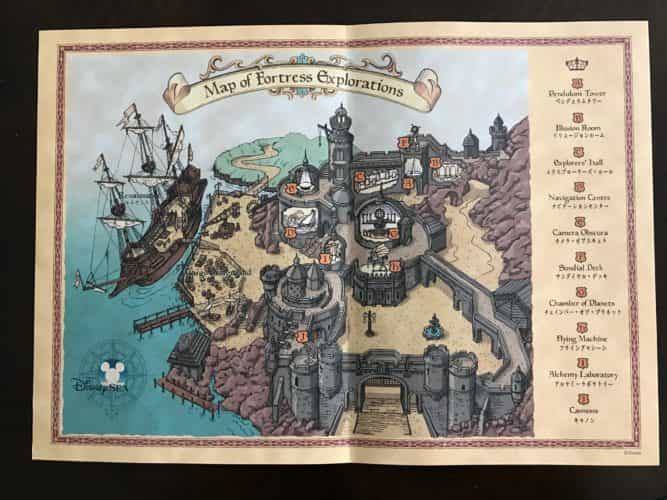 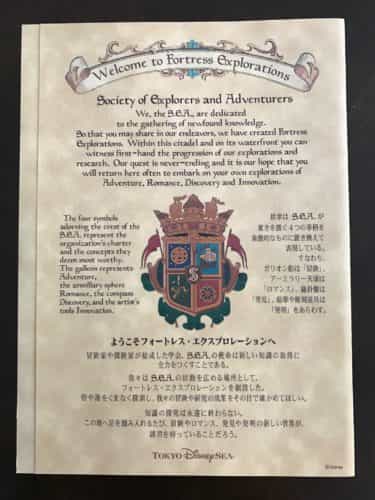 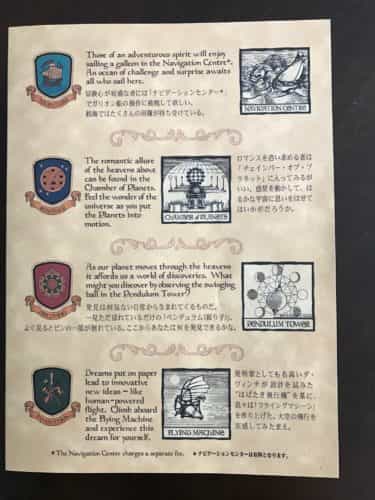 The Society’s influence can also be seen in the nearby Magellan’s restaurant, which served as the Society’s meeting place, and features a secret wine cellar hidden behind a bookcase.

When it came time to import the Tower of Terror to Tokyo DisneySea, the Imagineers ditched the Twilight Zone theme found in all other incarnations of the attraction, and instead devised a brand-new storyline built around Society of Explorers and Adventurers member Harrison Hightower III. Hightower (who bears a suspicious resemblance to Disney Imagineer Joe Rhode) collected exotic artifacts in his New York Waterfront mansion, including the cursed Shiriki Utundu statue that caused his mysterious disappearance.

The next place the Society of Explorers and Adventurers made a major impact was at Hong Kong Disneyland, which opened its Mystic Point expansion in 2013. Mystic Manor, the land’s signature E-Ticket trackless dark ride, is centered around Society member Lord Henry Mystic and his mischievous monkey Albert. The attraction contains numerous references to the S.E.A. storyline, including a group portrait of the club’s members in the queue.

Nearby, the Explorer’s Club restaurant continues Lord Mystic’s story with decor drawn from his collection of antiquities, including some animated masks and other artifacts that originally adorned the walls of Walt Disney World’s Adventurers Club.

Lastly, though there is no official confirmation yet, it seems that Hong Kong’s new Disney Explorers Lodge may reveal some connections to S.E.A. when the hotel opens on April 30. 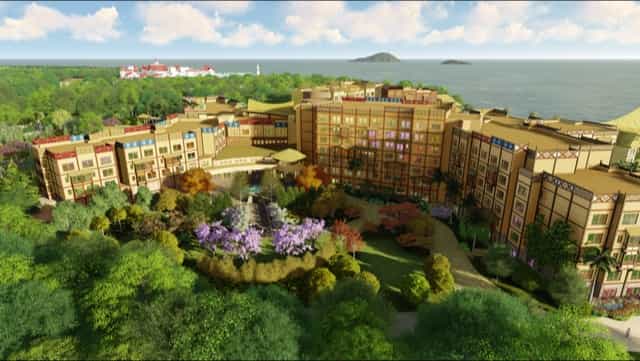 Disney’s Hawaiian destination doesn’t have many explicit ties to the Society of Explorers and Adventurers, but there is one easter egg to keep an eye out for. Inside the Aunty’s Beach House kids club hangs a painting that once graced the Adventurers Club, accompanied by a letter from Pamela Perkins that references S.E.A. member Harrison Hightower III. 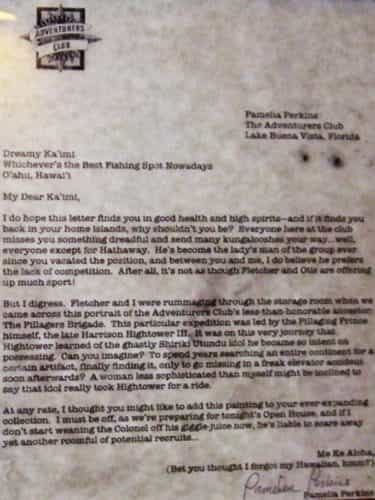 The Society of Explorers and Adventurers is no longer restricted to dry land, but can also be found on the high seas aboard the Disney Cruise Line. Each ship sports an Oceaneers Lab, which is themed around S.E.A. member Mary Oceaneer. You can find artifacts from her explorations around the ships’ kids area, including references to Society-related attractions in Asia, and even the same group portrait of S.E.A. members that hangs in Hong Kong’s Mystic Manor. 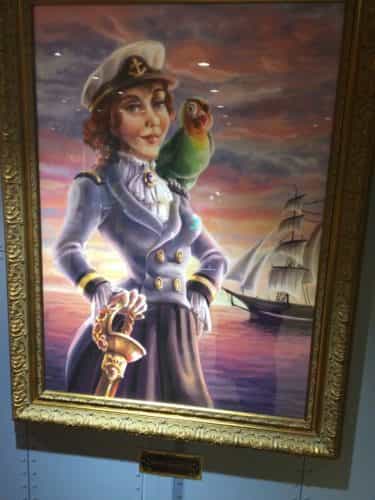 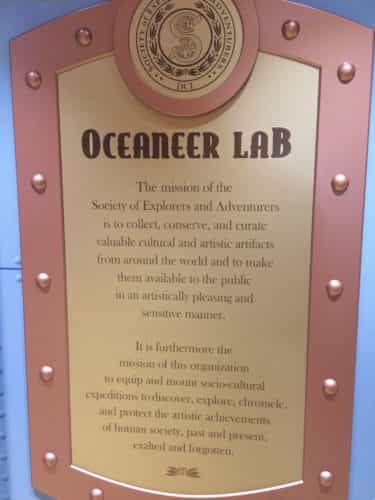 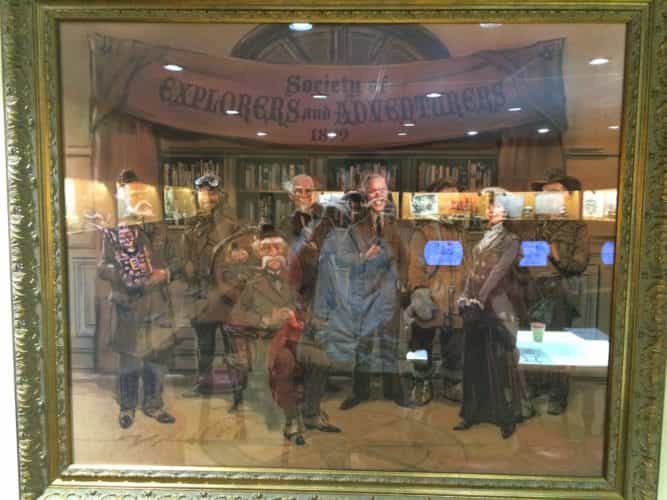 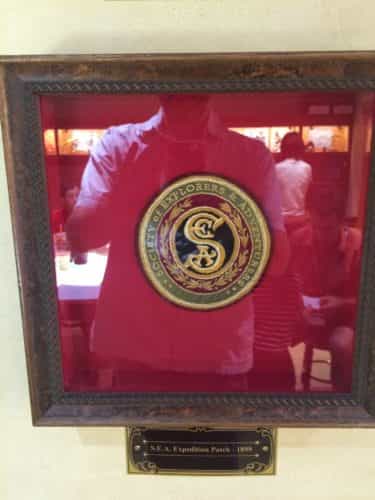 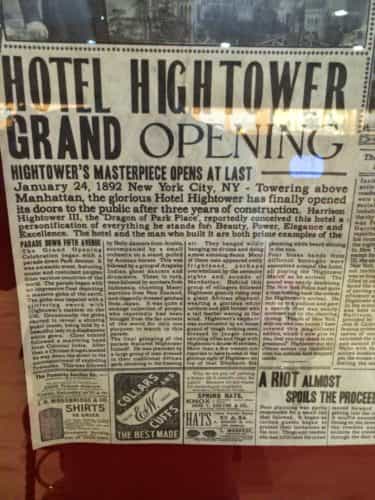 We now come full circle back to Walt Disney World, where references to the Society have recently been integrated into new and updated attractions.

The first official appearance of the S.E.A. in Florida came with the 2013 refurbishment of Big Thunder Mountain Railroad at the Magic Kingdom. Along with a new interactive queue, the ride received a retconed backstory involving mine owner Barnabas T. Bullion (modeled after Imagineer Tony Baxter) and inventor Jason Chandler, both of whom are members of the Society of Explorers and Adventurers. You can learn more about these characters in Marvel’s 2015 Big Thunder Mountain comic books.

The S.E.A. next appeared at the Magic Kingdom in 2015 as part of the Jungle Skipper Canteen restaurant, which was founded by Society member Dr. Albert T. Falls. Like the previously mentioned restaurants in Tokyo and Hong Kong, Skipper Canteen sports decor referencing the Society, and even features a “secret” dining room that served as an S.E.A. meeting space.

Also in 2015, Jock Lindsay’s Hangar Bar debuted at Disney Springs. Inspired by Indiana Jones’ pilot pal, who appears briefly in the beginning of Raiders of the Lost Ark, the watering hole’s decor and menu reveal that Lindsay was a member of the Society of Explorers and Adventurers as well. 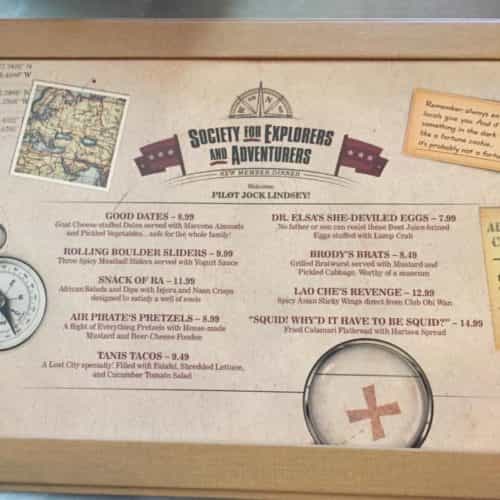 Finally, we finish where we began, with this month’s opening of Miss Adventure Falls at Walt Disney World’s Typhoon Lagoon. The new rafting attraction’s queue is chock full of references to Mary Oceaneer, and the ride itself even features an animatronic version of her parrot pal.