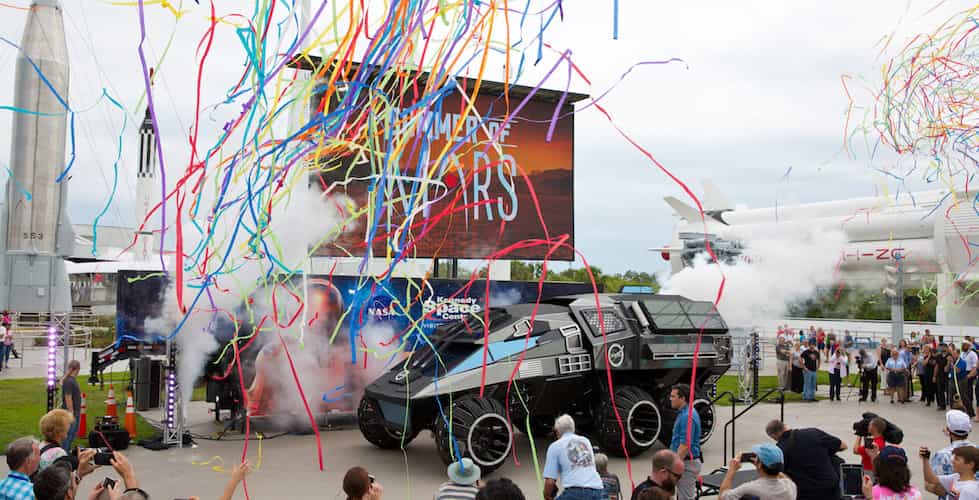 The Kennedy Space Center Visitor Complex officially kicked off its “Summer of Mars” event on June 5.

The “Summer of Mars” made its official debut on June 5 at the Kennedy Space Center Visitor Complex, with an event featuring Scott Kelly, who was the first NASA astronaut to complete a year-long space mission onboard the International Space Station.

This summer-long campaign gives guests a front-row seat to NASA’s Journey to Mars at Kennedy Space Center Visitor Complex, as well as showcases activities and experiences that focus the future of Mars missions and space exploration.

The highlight of “Summer of Mars” is the addition of a concept Mars rover vehicle to the Space Center. The 11-foot-tall, 6,000-pound rover is on display at the visitor complex through the end of June. After its run, it will begin a tour of select cities on the East Coast from mid-July through August. The rover was commissioned to be a traveling exhibit to inspire and educate the public about interplanetary travel and space exploration. The rover is currently scheduled to visit New York City, Jersey City, Washington, D.C., and more. The touring schedule can be found here.

The rover was built by Cape Canaveral-based Parker Brothers Concepts, with input from science and specifications from NASA engineers. The Mars rover seats four passengers, and was built to handle the current environmental conditions of the planet. It serves a dual purpose as a full research lab, or a small scout vehicle. With solar panels, carbon fiber accents, and 50-inch wheels designed specifically for Mars’ sandy terrain, the rover was created to be as realistic as possible for educational purposes, but it is not functional for space travel.

The Mars theme continues throughout the Kennedy Space Center Visitor Complex with activities like the “Journey to Space 3D” film in the IMAX Theater, “Journey to Mars: Explorers Wanted” live theater and interactive experience, the interactive game CosmicQuest, and more.

This “Summer of Mars” all leads up to the opening of the new Astronaut Training Experience (ATX) center, which is set to open in fall 2017. The ATX center will bring guests as close to actual space training, as well as living and working on Mars, without ever leaving Earth. Guests will use virtual reality and simulators to experience their training, with missions like landing on the Red Planet, walking and driving on the terrain, working on Mars Base 1, and more. The ATX center will have floor-to-ceiling 4K screens to help create the most realistic experience possible, making guests feel as if they are actually making the expedition to Mars.

For more information on “Summer of Mars” and the Kennedy Space Center Visitor Complex, visit kennedyspacecenter.com.