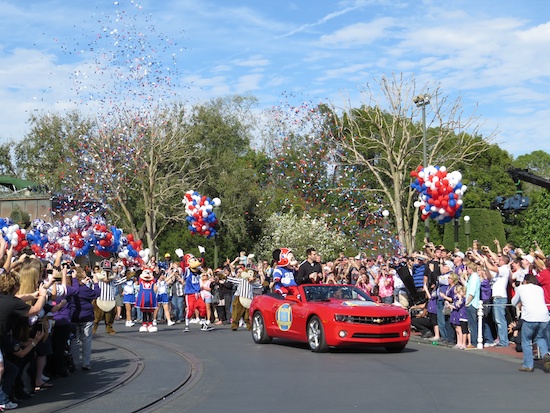 Super Bowl MVP Joe Flacco, quarterback of the Baltimore Ravens, said he was going to Disney World last night in a commercial shot right after the big game, and he made good on that statement today.

Joe shouted those five words ingrained in the traditions of American pop culture following the Ravens’ 34-31 victory over the San Francisco 49ers in Super Bowl XLVII. “I’m Going to Disney World!” beamed Flacco into the cameras as confetti rained down from the rafters of the Mercedes-Benz Superdome.

Joe’s pronouncement, part of the production for one of TV’s most enduring and iconic Super Bowl commercials, was captured within seconds of the final whistle. His team’s victory kept the Ravens unbeaten in Super Bowl play at 2-0. Flacco was named the game’s Most Valuable Player.

On Monday, Joe rode from Frontierland at the Magic Kingdom, past Cinderella Castle and down Main Street USA with Mickey Mouse and other Disney characters, all dressed for the occasion.

Joe’s declaration becomes the 26th Super Bowl commercial in the Disney series that began in 1987 following Super Bowl XXI. The first “I’m Going to Disney World” commercial featuring New York Giants quarterback Phil Simms was considered a groundbreaking concept – a produced commercial involving a current event, airing on major networks within hours of its conclusion. Joe joins an all-star lineup of heroes from sports and beyond who have celebrated milestone accomplishments in “I’m Going to Disney World” commercials.

Here’s a look at Joe’s ride through the Magic Kingdom:

Here’s a look at the commercial: