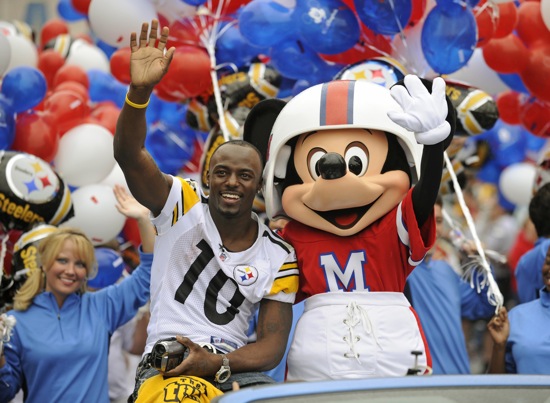 “Steeler Nation” shifted the victory celebration east from Tampa to Walt Disney World Monday as thousands of black-and-gold-clad, Terrible Towel-twirling fans of the Super Bowl champion Pittsburgh Steelers lined Main Street, U.S.A. They came to Magic Kingdom to be part of something that has become an iconic moment of post-Super Bowl celebration – to cheer one of their newest conquering heroes, Super Bowl MVP wide receiver Santonio Holmes, in a victory parade.

Just hours after he and quarterback Ben Roethlisberger hooked up for a touchdown pass with 35 seconds remaining to earn Pittsburgh a 27-23 victory over the Arizona Cardinals in Super Bowl XLIII, Holmes was riding high, smiling and waving back from a convertible as he celebrated at Walt Disney World Resort.

Holmes was doing precisely what he said he was going to in the latest episode of the long-running Disney commercial that asks people who have just experienced a milestone, “Now that you’ve (accomplishment) … What are you going to do next?”: In chorus with Roethlisberger, Holmes beamed and screamed, “We’re going to Disney World!”

Mickey Mouse in full game uniform sat next to Holmes in the blue convertible while a group of NFL Youth Football players from Jacksonville, Fla. walked behind holding bouquets of colorful balloons. Goofy, in Steelers colors, was part of the procession, too, as were Chip ‘n’ Dale wearing referee stripes.

The commercial that was shot immediately after the game and aired Monday morning is the milestone 40th of a series that began in 1987 following Super Bowl XXI. The first “ I’m going to Disney World” commercial, featuring New York Giants quarterback Phil Simms, was regarded as a groundbreaking concept – a produced national commercial involving a current event, airing on major networks within hours of its conclusion. 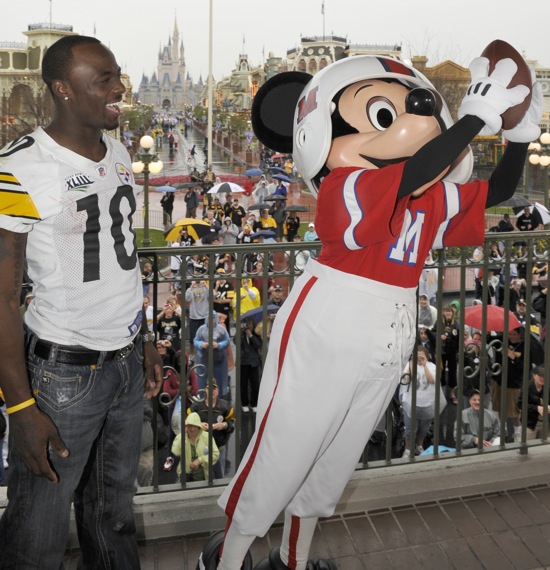 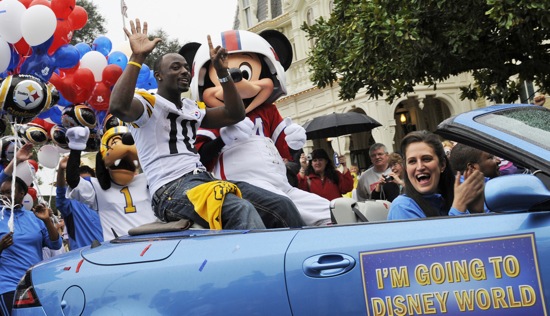 SeaWorld and other Busch parks in Dubai postponed