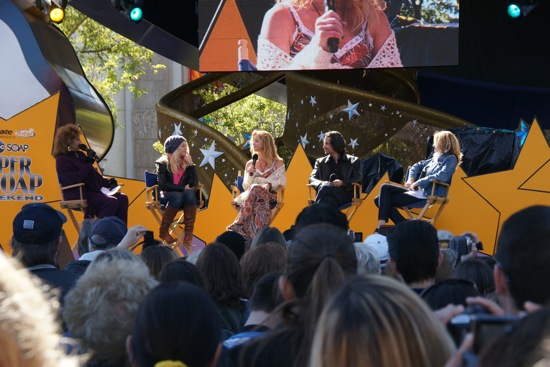 The ABC-SOAPnet Super Soap Weekend was held today and yesterday (Nov. 15-16, 2008) at Disney’s Hollywood Studios. Fans got a chance to see their favorite ABC soap stars up close during many different events.

In addition to autograph signings, they also held celebrity motorcades down Hollywood Boulevard to the stage set up in front of the sorcerer’s hat, where they conducted interviews. Also a part of the weekend was a casting call game where fans could act out scenes with the stars, and a game show that pitted stars of the different shows and their fans against each other. The Soap Central area inside the ABC Commissary not only had Super Soap merchandise for sale but actual props and clothing used on the shows.

This year is the last Super Soap Weekend as ABC’s Daytime Division embarks on the 2009 Soap Nation Tour, a series of nationwide events designed for interaction with fans on a year-round basis. Many fans in attendance wore “Save Super Soap Weekend” shirts and some of the stars also expressed their disappointment and hope that it will return again sometime in the future.

Below is a quick video we shot of Susan Lucci (All My Children) coming down the street with Minnie Mouse and being introduced by Sherri Shepherd of The View. There’s also a quick clip of four stars from One Life To Live in a motorcade.

For more than 60 pictures from the weekend, visit our Photo Gallery section.