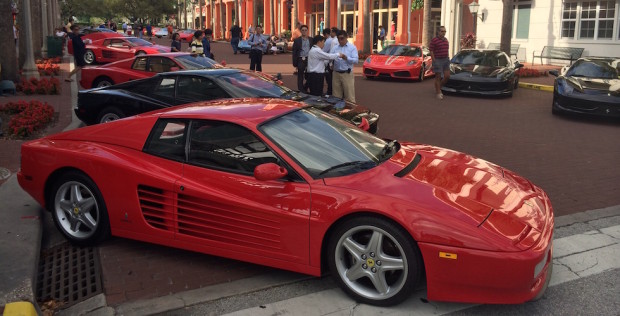 The 12th Annual Celebration Exotic Car Festival is back from April 9 through 12. The four day event, which benefits children’s charities, invites participants and spectators to see some of the world’s most exotic cars and mingle among Hollywood actors.

The exotic cars will first take on Daytona International Speedway from April 9-10. After that, the Concours of Exotic Cars will bring 250 exotic cars, race cars and Hollywood movie cars to Celebration, Fla.’s lakefront this Saturday April 11, 2015. Ferrari, Maserati, Lamborghini, Bugatti, McLaren, Lotus, Aston Martin and many others will be displayed.

A “Happy Days” reunion is planned featuring Henry Winkler, Donny Most and Anson Williams meeting by the Happy Days Hot Rod. Other movie cars on display will include the Back to the Future DeLorean, Batmobile, Star Wars Landspeeder, and a Fast & Furious Charger. Admission is free for spectators.

The event will conclude on April 12 with the annual Exotic Car Road Rally.

Since 2004, more than $1 million has been donated to children’s charities, including Make-a-Wish, Special Olympics and Arnold Palmer Children’s Hospital, through the efforts of this event.