Today at 5:03 p.m. EST, Walt Disney World Resort tweeted that the Disney Parks were experiencing a bought of technical difficulties due to a temporary systems outage. 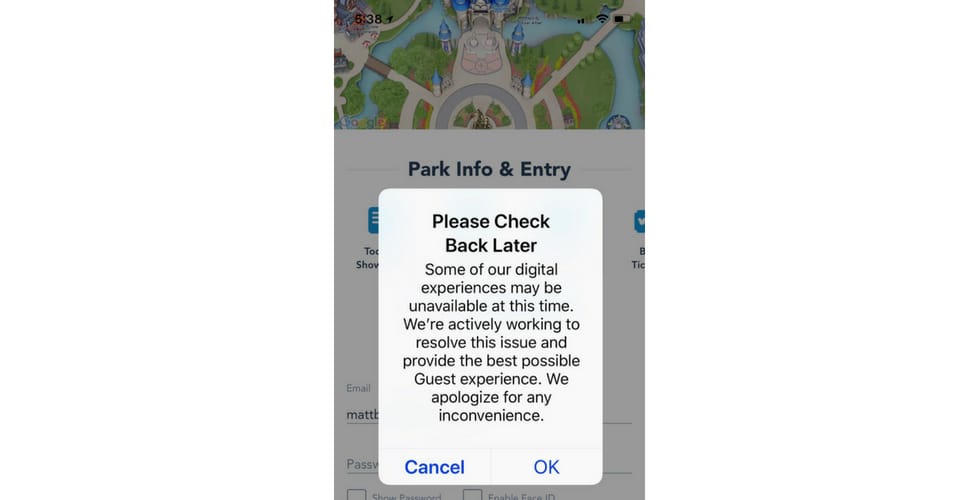 As a result of this outage, guests are currently unable to book or see their FastPasses, book or view their dining reservations, and otherwise utilize the Disney Parks apps.

Currently, this outage has affected the Walt Disney World Resort, the Disneyland Resort, Disneyland Paris and the Disney Cruise Line.

It’s been this way at Disney’s California Adventure Park since about 11:30 AM local time. pic.twitter.com/NbnnEqEFEV

It's affecting Disneyland Paris as well.

Without the ability to use their online systems, guests risk losing their window to book FastPasses and dining, which can make or break some vacations.

Yep, though I just wanted to pick my magic band colors for next year, so I feel really bad for those who have more important business on their site.

Guests on Twitter have also said that FastPass kiosks at Walt Disney World are also non-operational, which makes obtaining FastPasses, at this point, impossible.

Multiple cast members directed me to the kiosks. pic.twitter.com/hapG8JbP0m

Cast members are also being affected by this outage, as the Walt Disney Company’s intranet, called The HUB, is also down.

There is no word on what caused this outage, or when the Disney systems will be brought back online.

We will keep you updated on the status of the Disney Parks’ online systems as this story develops. Stay tuned to our website, Facebook, and Twitter to get the latest updates on this and other stories.

Has this outage affected your Disney vacation? Let us know in the comments below, or tweet us your story @Attractions on Twitter.

UPDATE: As of 8:40 p.m. EST, Walt Disney World Today tweeted that their systems were operational once again.

After checking for ourselves, we saw that the Disneyland app was also operational, and got confirmation from cast members that The HUB was also working. It should be only a matter of time before we get confirmation that all systems are back online for the Disney Parks.

My delight and surprise over Disneyland’s Adventureland...

A look from above at the construction...