We heard it straight from the Yeti’s Twitter account: Joe Rohde, Portfolio Creative Executive at Walt Disney Imagineering, is still working to fix the yeti in the Expedition Everest attraction at Disney’s Animal Kingdom. 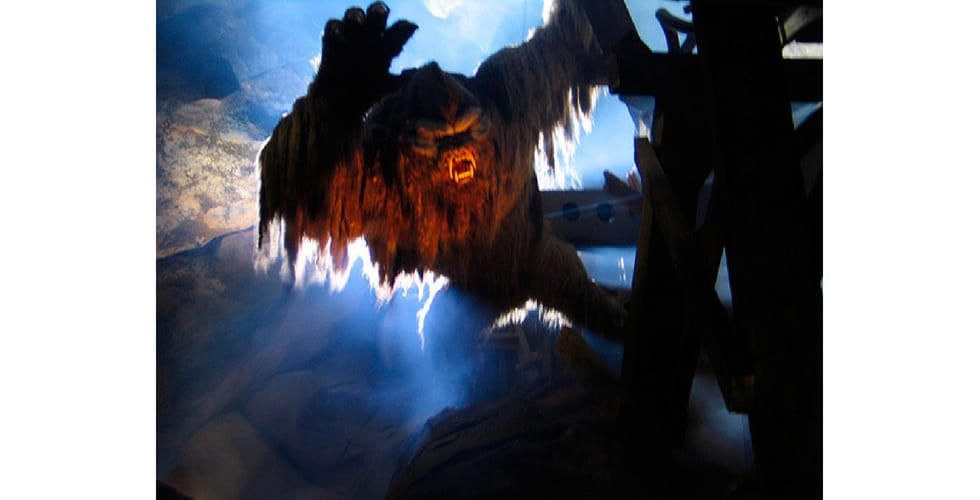 Once again, DisTwitter explodes with talk of fixing the “Disco Yeti.”

You can hear Rohde say “I will fix the yeti,” in this video from The DIS below, starting at 48:28:

The yeti, the largest and one of the most complex audio-animatronics ever built by Walt Disney Imagineering, has been experiencing problems since the attraction opened in 2006.

A few months after the ride’s opening, the framing for the yeti figure split due to the extreme stress of the figure’s movements, which could’ve led to ride-threatening malfunctions if it resumed normal operation.

In full operation, or A-Mode, the yeti was once able to swipe at riders aboard the Anandapur Tea Company trains as they speed by. According to the Orlando Sentinel, the last known occurrence of the yeti in A-Mode was back in March 2009.

Ever since then, we’ve been stuck with Disco Yeti, or B-Mode yeti, where our fearsome creature stands stationery alongside strobe lighting to simulate movement.

DisTwitter erupted at this revelation, racking up 310 retweets and 2,167 likes and climbing on Rohde’s response.

Some fans had a few of their own opinions on how to fix the yeti, and how long its taken to be fixed:

been twelve years bro. not trynna rush you but , u kno . (good to hear it’s not being forgotten abt tho )

After seeing this next tweet from @Shannon_Lyver_, Rohde decided to respond, before going into a full discussion on the coloration of a yeti’s fur… if they actually existed.

If yeti is real, likely to be cryptically colored, ala snow leopard. If real it lives where food is, in forest not snow. Sherpas say brown. https://t.co/B61Bd8PXYx

I read that the idea of a white yeti came about when the term “abominable snowman” was first used, which was actually just an error in translation by a traveling journalist.

Eh, what about a white fox or a polar bear. It’s also not anymore real than a strobe light in a cave. Still looks cool but white isn’t out of the realm of reality.

Yes but those critters live in a Polar environment. The Himalayas are mostly forest and jungle. Snowy on top, but not much lives up there. https://t.co/jKaaXUV3h7

Will we ever see the yeti fixed? Only time will tell, as there is no current announcement for Expedition Everest’s closure for the yeti’s repair. For now, check out the Disco Yeti in all its glory in our ride-through POV below:

I’ve been to Disneyworld a few times.
But on my honeymoon in 2007, that Yeti was white and looked way better. It was way easier to see. You’d almost felt his arm was going to hit you.

When and why did they change it to brown?

They didn’t. I think you’re thinking of the one in Disneyland’s Matterhorn, which is white. The yeti from Expedition Everest has always been brown.