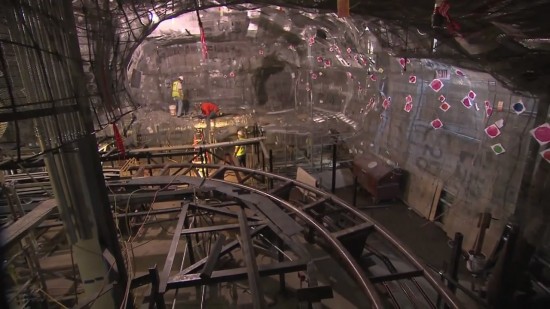 Disney has released videos providing your first look inside two anticipated construction projects in New Fantasyland at the Magic Kingdom.

Anticipated to debut in Spring 2014, the Seven Dwarfs Mine Train will take guests on a rollicking, musical ride into the mine “where a million diamonds shine” and through the rolling countryside surrounding the mine. The family-style coaster will feature a first-of-its-kind train of ride vehicles mounted in cradle-like pivots that allow the cars to swing back and forth during the ride. The journey will be accompanied by music from the classic Disney film and there’s a cast of animated figures of Snow White, the Seven Dwarfs and a collection of playful forest critters.

Located in the Castle Courtyard in the center of Fantasyland, Princess Fairytale Hall will be the new home for Disney princesses to meet their loyal subjects in the Magic Kingdom. The castle-like entrance will feature walls of stone and stained glass windows opening up into a large gallery — an airy space with a high ceiling — where portraits of the Disney princesses adorn the walls. When it’s time for their royal audience, guests will proceed to one of four elegantly finished chambers to meet their favorite Disney princess. Each chamber accommodates up to two Disney princesses. Look for this addition to open later in 2013.

Out of the Loop: Planet Snoopy on...