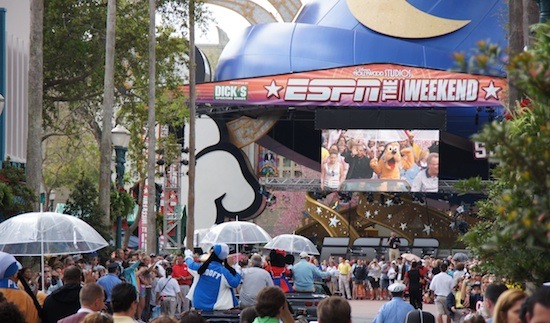 ESPN The Weekend has been held at Walt Disney World since 2004. The yearly event, mostly held at Disney’s Hollywood Studios, had its last run this past March.

The yearly springtime event featured ESPN shows filmed live at the theme park, sports celebrity motorcades, live talk and game shows and an area for guests to try their hand at many different sports.

Darrell Fry, sports media director for Walt Disney World, announced on the Disney Parks Blog they will no longer be hosting the yearly event “in order to focus our efforts on ESPN’s growing year-round presence at Walt Disney World Resort.”

The ESPN Wide World of Sports Complex will be a part of their new efforts. “Moving forward, our focus will be on creating events like the new ESPN RISE Girls Showcase and the ESPN RISE Games,” said Fry, “which provide a stage for tens of thousands of athletes from around the country, and providing opportunities for guests to be part of events they’ve only before watched on television, such as the Home Depot College Football Awards and the Old Spice Classic.