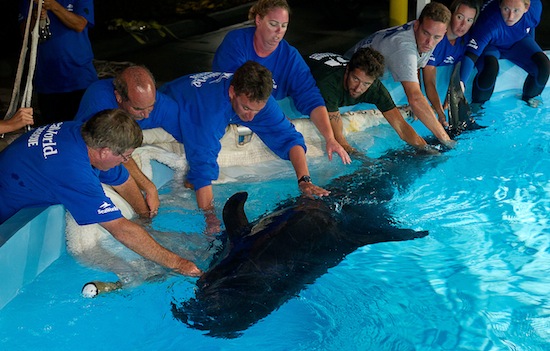 Early this morning, SeaWorld’s animal experts and rescue team transported a young pilot whale to the park’s new Cetacean Rehabilitation Facility. The 9-foot, nearly 600-pound whale was being cared for in Key Largo, Fla., by SeaWorld staff and other volunteers after it and 20 other pilot whales beached themselves in the lower Florida Keys in early May.

The National Marine Fisheries Service and other animal experts considered the two-year-old female whale to be a “dependent calf” that could not be returned to the wild and was in dire need of extensive hands-on treatment. SeaWorld Orlando was chosen to provide a home and long-term care for the animal because of the park’s experience with pilot whales and expertise in animal husbandry and care, especially with stranded animals. 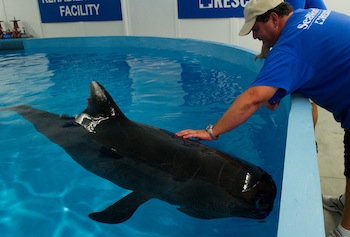 For the five-hour trip to Orlando, the whale was carefully placed in a stretcher and then into a large, water-filled transport unit in a cooled truck. The whale was continually monitored by park animal experts and chief veterinarian, Dr. Chris Dold, during the trip. According to Dold, “It’s still too early to tell her long-term prognosis, but she traveled well, she’s getting settled into her new surroundings, and we’re cautiously optimistic about her future.”

This pilot whale calf is the first resident of SeaWorld’s new, 40,000-gallon rehabilitation pool, a facility designed specifically to rehabilitate whales and dolphins rescued from the wild. At the facility, the park’s animal experts will monitor the whale round the clock, performing physical examinations and additional testing. SeaWorld’s goal is to have her join the company’s other pilot whales in the near term.

In the past 45 years, more than 18,000 animals have been rescued and cared for by SeaWorld’s animal rescue experts. The ultimate goal for every animal SeaWorld rescues is to return it to the wild. For the few the government deems unable to survive on their own, such as this pilot whale, SeaWorld is willing to provide a permanent home.