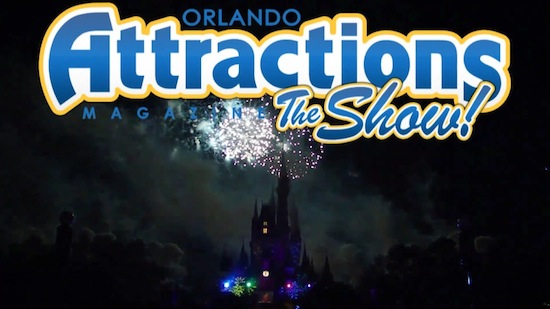 May 12, 2011 – Join our hosts as they bring you the latest Orlando theme park and attraction news and more on this week’s episode.

Contest Details
Go to facebook.com/attractionsmagazine. Post a photo of you watching one of our Shows on your computer or other device, OR post a photo of just your computer/device screen with The Show playing.
One winner will be randomly chosen from all the entries’ and announced on our May 19th Show.
Deadline for entering: Sunday, May 15, 2011, 6:00 pm eastern standard time
Prize: A Tandem Deluxe Parasail Flight at Sammy Duvall’s Watersports Centre at the Contemporary Resort, Walt Disney World (Valid through 12/31/2011)

A look inside the new Dine-In Theaters at Downtown Disney

One of the great things about your efforts is that there are people like me who for reasons that I won’t go into can’t get down to Orlando but are able to vicariously stay up with what’s going on thru you. Thank You. I hope you have many chances to expand even more(a cable or broadcast TV show would be nice).

The Attractions Show! – A Celebration of...