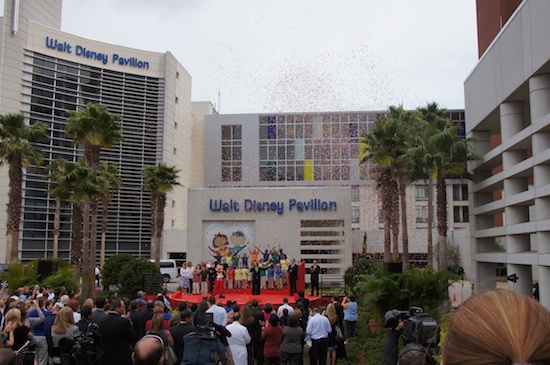 To mark the momentous occasion, community leaders and medical professionals gathered for a ceremony on the front lawn. Several pediatric patients shared their inspirational stories of hope and perseverance before being joined on stage by Mickey Mouse. A performance of an inspirational song punctuated by a colorful burst of confetti officially opened the Walt Disney Pavilion.

“A hospital can be an overwhelming place, and we have worked very closely to learn how to make each experience special,” said Marla Silliman, administrator of Florida Hospital for Children. “Our mission is to provide the best care possible for our patients. I believe that we have achieved our goal by creating a hospital that brings world-class physicians, top-of-the-line technology and a truly patient-centered experience for children all under one roof.” 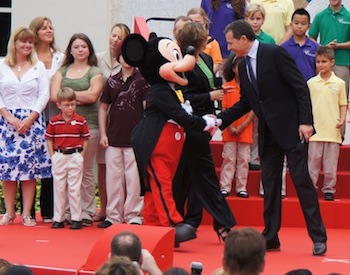 “As a company with more than 62,000 cast members in Central Florida, we care deeply about the families in this community and are proud of our collaboration with Florida Hospital,” said Iger. “Disney Imagineers worked closely with the hospital to create a truly unique environment for pediatric patients and their families that we hope will inspire courage and comfort to those who seek care here.”

The pavilion is a seven-story facility that creates a relaxing environment and brings some of Disney’s magic into the hospital. When patients walk in the front door, they are greeted by a one-of-a-kind interactive lobby created by Disney’s Imagineers. Inspired by the soothing environment of nature, the lobby features Disney characters such as 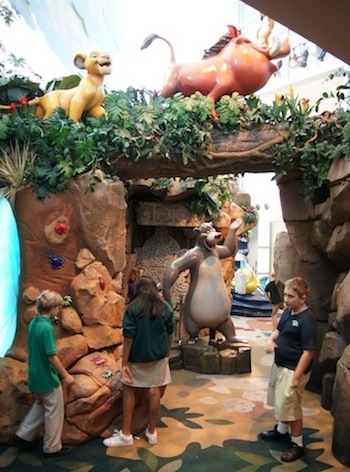 Timon and Pumbaa from The Lion King, Flounder and Sebastian from The Little Mermaid, Rutt and Tuke from Brother Bear and Baloo from The Jungle Book. You won’t find any of the Disney movie’s stars represented because at this children’s hospital, the children are the stars.

The Walt Disney Pavilion is comprised of 200 pediatric beds, a dedicated pediatric Emergency Department, an advanced 81-bed Neonatal Intensive Care Unit (NICU) and pediatric surgical suites. The nature themes that are featured in the lobby, which include the ocean, savannah, jungle and mountains, are carried throughout the hospital and incorporated into the artwork, design, family waiting areas and more. Each floor has its own theme to help transition patients and families to a relaxing environment beyond the walls of the hospital. There are even custom scents on each floor to match each of the themes.

Throughout the design process, Florida Hospital also enlisted the help of its Family Advisory Council, which is an advisory group of past patients, parents and staff that offers feedback on the hospital. The council contributed ideas on the layout of patient rooms, helped design the unique “family zone” waiting areas and even tested out various chairs and pull-out sofas that were incorporated throughout the hospital.

“It was extremely important that our patients and their families have a voice in the design of this new facility,” said Tim Burrill, assistant administrator at Florida Hospital for Children. “Their feedback and input has helped us better understand their needs and led to some great new ideas such as our ‘family zones.’ Instead of traditional waiting rooms, we created themed areas for families to gather, grab a snack and recharge without leaving the patient unit.”

• Look for a full video report from the new hospital pavilion in Episode 19 of Orlando Attractions Magazine – The Show.

My 14yr old is a cancer survivor and I think this is great for all hospitals! It isn’t fun being in a hospital, so adding a “Disney twist” really helps make it fun.