Theater Review: Where are you ‘Where Are You Christmas’? – Grinch, The Musical 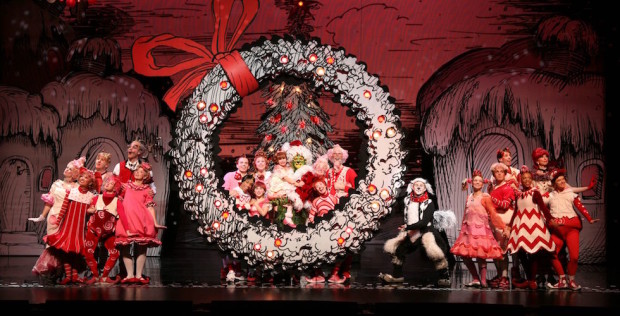 “Dr. Seuss’ How The Grinch Stole Christmas – The Musical” is now playing at the Dr. Phillips Center for the Preforming Arts in downtown Orlando. The story is basically the same as the Children’s book and cartoon of the same name, with some additions.

The story is narrated by an old version of the Grinch’s dog Max (Bob Lauder), while he reminisces about the old days back when he was a younger dog (Matt Weinstein) and lived up on the mountain north of Whoville with The Grinch (Stefan Karl). He goes on to tell the story of the Whos who live down in Whoville who like Christmas a lot (The Grinch does not). But the story centers on Cindy-Lou Who’s (Rachel Katzke) family, Papa Who (Vincent DiPeri), Mama Who (Melissa Weisbach), Grandpa Who (Zach Kononov), Grandma Who (Camella Clark) and Annie Who (Anya Rothman/Stephanie Ticas). (The actress who played Cindy-Lou, Rachel Katzke, was great and very, very good for being so young.)

In case you don’t know the story: As the Who’s are all preparing for Christmas, the Grinch hatches a plan to stop Christmas from coming by impersonating Santa Claus and stealing all of the Christmas decorations, presents and food from Whoville while the Whos are asleep Christmas Eve.

The music in the production is mostly different from the music you hear in Universal’s version of the show at Islands of Adventure theme park – The Grinchmas Who-liday Spectacular. Since I’ve grown up hearing songs like “Where Are You Christmas” from the Universal version of the show every year, I was a bit disappointed when the only songs I recognized were “Fah Who Forage”, “Welcome, Christmas” and “You’re A Mean One, Mr. Grinch”. The new-to-me songs are pretty good, although they aren’t as iconic or catchy as the well-known ones.

Some of the set pieces for the show were in Dr. Suess’ style and some were more symbolistic, to where you had to use your imagination. I prefer more of a direct approach, but there wasn’t as many symbolistic pieces, so it definitely wasn’t to the point where it’s completely up to your imagination.

This story is based off of a children’s book, and while it does have some humor only adults will understand, it really stays in the children’s genre, so I definitely recommend it for families with small children. It’s a cute show for kids and families with kids, but maybe not for the average adult.

“Dr. Seuss’ How The Grinch Stole Christmas – The Musical” is playing each day through Sunday, Dec. 13, 2015 at the Dr. Phillips Center for the Preforming Arts. Visit drphillipscenter.org for more information and tickets.