Theater Review: The curious incident of the play at the center: Bring your imagination 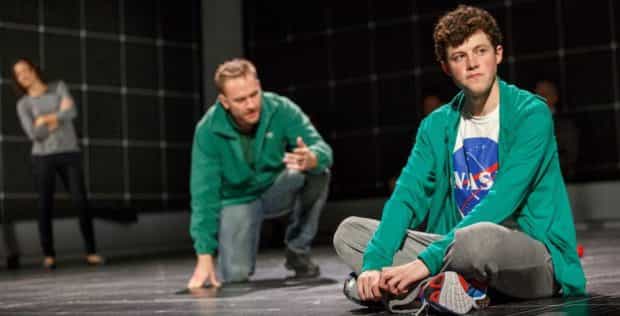 Felicity Jones Latta, left, Gene Gillette, center, and Adam Langdon in The Curious Incident of the Dog in the Night-Time. Photo by Joan Marcus.

As soon as I walked into the theater I knew “The Curious Incident of the Dog in the Night-Time” was going to be an interesting play. The first thing I noticed was a dog lying in the middle of the stage, presumably dead with a pitchfork sticking out of it.

The story begins when Christopher Boone (Adam Langdon) – a 15-year-old boy who knows all the countries of the world and their capitals, has very little understanding of human emotion, cannot stand to be touched and detests the color yellow – discovers a dead dog while out walking his neighborhood one night. After being falsely accused of killing the dog, Christopher decides he’s going to bring justice to the neighborhood by figuring out who murderered him. There are twists, turns, and obstacles that would be simple for anyone who is unhindered by a condition such as Christopher’s to overcome. But the curious incident of the dog isn’t the only mystery needing solved.

Aside from the costumes and hand-props used, everything was very representative. The set is very basic – the inside of a cube with one wall. Projection mapping and lighting effects were used for set changes, and white boxes were used for nearly all of the furniture. If you’re someone who’s bad at using your imagination, this definitely isn’t the play for you.

While it’s never stated exactly what Christopher’s condition is specifically, it definitely doesn’t hinder the story as long as you take everything as it comes. It’s rare to find a story with a main character with a disability, and even rarer to see things from their point of view. That was definitely an interesting factor. The plot’s twists kept me on the edge of my seat, even though I was very tired from a long day at school.

“The Curious Incident of the Dog in the Night-Time” is playing at the Dr. Phillips Center for the Performing Arts now through this Sunday, Nov. 6.