Theater Review: I had a pretty good ‘time of my life’ at Dirty Dancing 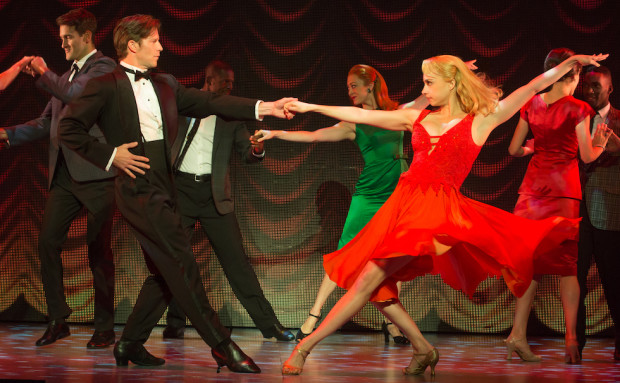 Dirty Dancing is onstage at Dr. Phillips Center for the Performing Arts through April 3, 2016.

This past Tuesday I had a pretty good ‘time of my life’ seeing “Dirty Dancing” for the first time at the Dr. Phillips Center for the Performing Arts. Don’t get me wrong, I enjoyed it, but it wasn’t the strongest performance I’ve seen at the center.

In the show, the Houseman family, Baby (Rachel Boone), Dr. Jake (Mark Elliot Wilson), Marjorie (Margot White) and Lisa (Alex Scolari), go on a summer vacation to a country club a family friend owns, called Kellerman’s. While visiting, Baby meets the employees of the club and quickly discovers not everything is perfect in paradise. After an unfortunate event leaves the female dance instructor unable to compete in an annual dance competition, Baby decides to fill in. The only problem is she doesn’t know how to dance. That’s where the resort’s hunky male dance instructor Johnny (Christopher Tierney) comes in – to teach her how to dance and simultaneously sweep her off her feet. (literally!)

The set was probably my favorite thing about the show. It was basically a series of blank walls and screens that had projections on them to simulate locations and objects. There was a good blend of physical props too, and some effects, like one instance when Baby and Johnny are walking on a log over a river, really stood out as things I haven’t seen before.

Disclaimer: I’ve never seen the movie version of the story. I thought the plot seemed kind of rushed and some of the side-characters and plot lines seemed thrown in at the last second. Here’s what my mom, who has watched the movie, thought of the comparison.

“The Dirty Dancing play and movie, of course, have a ton of similarities. But, the main differences are the live music and singers. It’s fun to see the well-loved movie onstage with fun dance choreography and a live band and singers. It’s way more immersive and entertaining watching it performed live.”

Even with a title like “Dirty Dancing” there wasn’t that much profanity. It was there, but less of it than you’d think. If I had to rate it, I’d probably say PG-13. I’m sure it wouldn’t be rated R. There’s no nudity, but there are a few characters in their underwear. Besides suggestive dancing, the only other sexual situation was when a character walked in on two characters engaged in intercourse, covered under a sheet.

Dirty Dancing is playing at the Dr. Phillips Center for the Performing Arts in downtown Orlando through Sunday, April 3. For tickets and more info, visit drphillipscenter.org.

It was enjoyable. My issue was them trying to cram every scene of the movie on to the stage and at the end it got to the point of short scene after short scene that got annoying. But I believe this show was made to attract the now middle-age female population who loved the movie growing up.