Theater Review: ‘School of Rock’ is a rockin’ and rollin’ good time for the whole family 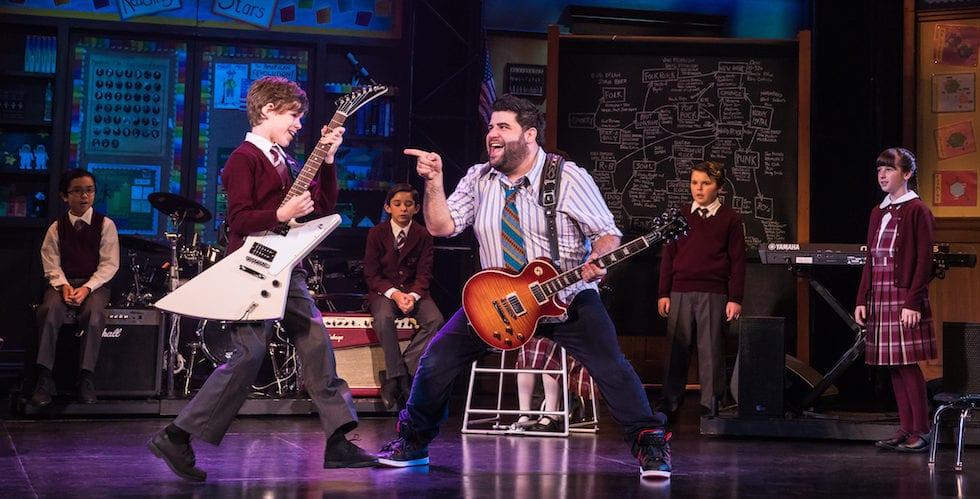 Rob Colletti and Lexie Dorsett Sharp in the School of RockTour. Photo by Matthew Murphy.

The first thing I think of when I hear “School of Rock” is the film starring Jack Black. There are very few plot differences between the movie and the musical, but the fact that it’s live and a musical, really adds life to this fun family-friendly story.

For those who haven’t seen the film or don’t know the story, it begins when a wannabe rock star named Dewey (Rob Colletti) gets kicked out of his band. Once Dewey gets home to his best friend and roommate Ned (Matt Bittner), he finds out Ned’s girlfriend is forcing him to make Dewey pay his overdue rent soon, or be kicked out. After finding this out, Dewey receives a phone call that is meant for Ned for a substitute teacher job at Horace Green Preparatory School. Impersonating Ned, Dewey takes the substitute job, but doesn’t exactly teach the correct curriculum. He decides to make his class his new band and enter them in their town’s annual Battle of the Bands. The kids quickly warm up to their new unorthodox teacher, and all have a specific role to play in their band, “School of Rock.”

Andrew Lloyd Webber’s music for the show brings a fantastic layer to the story, and really helps build up the characterization and further the plot. It definitely makes it more fun and exciting than just watching characters deliver lines to convey the same points and ideas.

The best part of this production by far are the extremely talented child actors that portray the students of Horace Green. They were all fantastic, and actually performed with their instruments live onstage. Every single one seemed like a huge triple threat – singing, dancing and acting their hearts out.

“School of Rock The Musical” makes a great night out for all ages.

Join us for ‘Early Night Live’ at SeaWorld’s Christmas Celebration