Theater Review: Welcome to Planet Orlando – no better place to see ‘The Book of Mormon’ 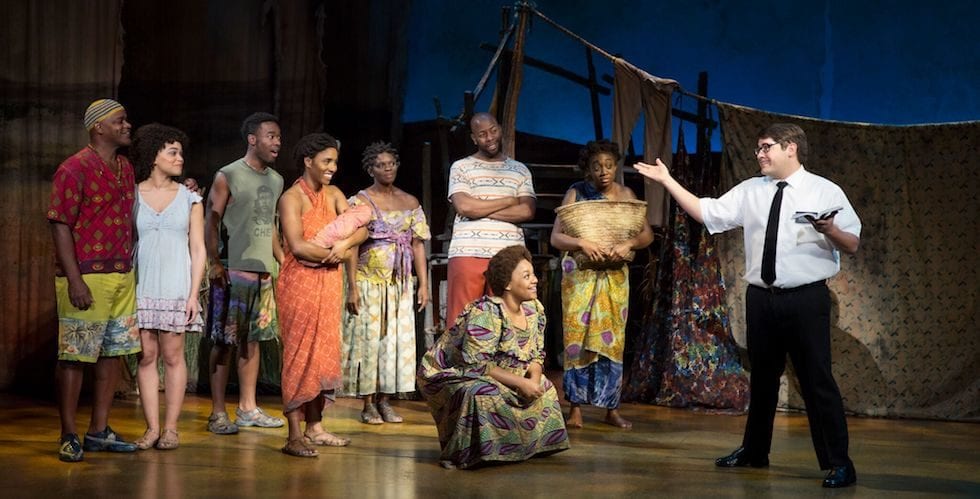 Elder Arnold Cunningham, right, speaks to the people of Uganda in “The Book of Mormon”.

Elder Price may not get his dream of being sent to Orlando, but “The Book of Mormon” musical has arrived. You’ll enjoy the journey, as long as you’re not easily offended, can take jokes about religion and sex, and jests about the lives of the less fortunate.

That being said, while not being politically correct by any means, I don’t think there was any time during “The Book of Mormon” when I stopped smiling. The musical’s constant adult humor and huge show-stopping musical numbers means there’s never a dull moment.

The story starts by introducing Elder Price (Kevin Clay) and Elder Cunningham (Conner Pierson). They’re two very different Mormon boys about to be sent on their mission trip somewhere around the world to try and convert people to becoming Mormon. Elder Cunningham doesn’t have any friends, and also has a lying problem, so when he gets paired with the most popular Mormon boy, he’s ecstatic. Elder Price wants to be sent to his favorite place in the whole world, Orlando. Unfortunately Heavenly Father didn’t answer his prayers, and the church sends the pair to Uganda, Africa instead. Not only is it about the furthest thing you can get from the most magical place on Earth, the two find out the people of Uganda are going to be tough to convert, since they already have such little hope in religion. But as Elder Price loses hope, Elder Cunningham’s compulsive lying might actually help him do the seemingly impossible. (If not a liiiiiitle bit different than the approved Mormon dialogue.)

My description of the Book of Mormon’s plot is extremely innocent in comparison to the show itself. It takes every possible chance to make a joke, and almost all of them would be shocking to families with most older viewers and young children. This musical is as adult as you can get without explicit nudity or sex.

Every musical number is fantastically choreographed, catchy and hilarious. You’re sure to get some stuck in your head. The touring cast is great. I really can’t complain about any of them or the show. The two leads did an especially great job. Besides Salt Lake City, there’s no better place to see “The Book of Mormon” than Orlando.

“The Book of Mormon” is playing through Sunday, Dec. 17, 2017 at the Dr. Phillips Center for the Performing Arts. The production is conducting pre-show lotteries at the box office, making a limited number tickets available at $25 apiece. Entries will be accepted at the box office beginning two and a half hours prior to each performance; each person will print their name and the number of tickets (one or two) they wish to purchase on a card that is provided. Two hours before curtain, names will be drawn at random for a limited number of tickets priced at $25 each.

In the Parks
While there are no direct Book of Mormon attractions in the theme parks, Orlando and specifically SeaWorld, Disney and putt-putt golfing, are mentioned numerous times, so if you want to live out Elder Price’s dream, be sure to experience them for him.