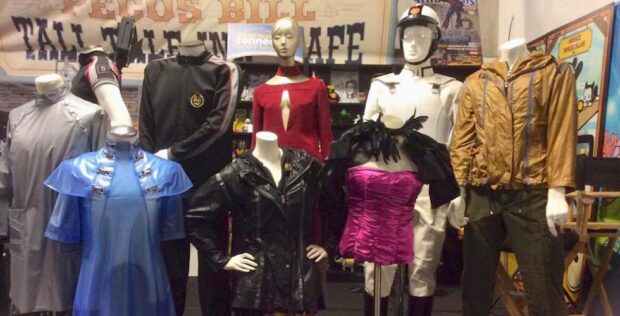 Theme Park Connection in Orlando may be known for buying and selling Disney theme park items, but they’re quickly becoming known for selling movie props and costumes as well. They recently sold two major items from “Jurassic Park”, now they’re giving fans of “The Hunger Games” a chance to bid on more than 800 costumes from the film.

Some of the items include Katniss Everdeen’s reaping dress, leather jacket and arena costume, with the mocking jay pin, worn by actress Jennifer Lawrence, along with a huge assortment of costumes worn by the films main love interest, Peeta Mellark, played by actor Josh Hutcherson. The list continues with complete Peacekeeper Costumes and other iconic screen-worn items from the original Hunger Games movie.

Theme Park Connection is launching the auctions in conjunction with eBay Promotions as a unique event due to the rarity and quantity of film items. All auctions start at just .99 cents with no reserve, which will allow everyone an opportunity to own a piece of “The Hunger Games”.

“You will find some costumes up now as a teaser, with the majority being offered March 20th through March 30th” said Brian Ramsey, general manager of Theme Park Connection. The event is titled, “May the Bidding Be Ever in Your Favor” which plays on the films iconic quote by Effie Trinket, played by Elizabeth Banks.

Along with the 800 costumes, Theme Park Connection’s ultimate offering includes a one-of-a-kind listing to own the entire lot of 23 Script Supervisor’s Continuity Books. The books feature more than 6,000 candid, behind-the-scenes, never before seen photos. The Continuity books are available now on eBay for $99,000 or best offer.

Ramsey stated, “I have never seen such a complete set of continuity books on sale anywhere before. There are photos of Jennifer Lawrence as Katniss, Liam Hemsworth as Gale, Elizabeth Banks, who plays the eccentric Effie in the film, even Woody Harrelson as Haymitch Albernathy and the rest of the cast. You have to own the set to see for yourself!”

You can see all the items up for auction at stores.ebay.com/ThemeParkConnection. You can also see some of the items on display at Theme Park Connection’s store at 2160 Premier Row in Orlando, near The Florida Mall.