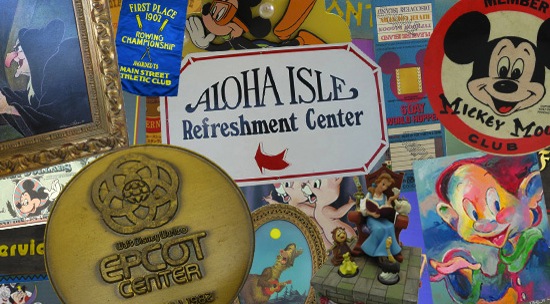 A new store is opening its doors this Saturday in Winter Garden, Fla., just down the street from Walt Disney World. But it’s not just down the road from Disney for no reason. Theme Park Connection’s warehouse store features thousands of Disney and theme park collectibles, props, costumes, signs, trading pins and more. All are invited to browse warehouse, enjoy free food, and even bring Disney items to sell for a little extra cash this Christmas season.

The grand opening only marks the official start of this location. Theme Park Connection has already been selling items via eBay while their warehouse has been in a “soft opening” phase for weeks, somewhat of a hidden secret in the Orlando area. They buy and sell the rarest of theme park items, from benches removed from Toontown to actual Man Street USA windows, to Disney Store statues and even screen-used Pirates of the Caribbean movie props.

The celebration will include:
• Free food including hamburgers, hotdogs, and drinks
• Free gift to everyone that attends
• 20 percent off everything in the store
• Appraisers available to buy Disney items on the spot for cash
• 10 percent of proceeds from all sales on opening day donated to Toys for Tots along with toys from the store

Theme Park Connection owner Marc Pianko refers to his company as “essentially the world’s largest Theme Park/Disney pawn shop” to explain how they not only sell Disney collectibles, but also offer a chance to make money on items that have been sitting around in collections.

“What many people in Central Florida don’t realize is they could be sitting on a goldmine in park items that can be turned into cash,” said Pianko. “Well that’s what we do. We buy, sell and trade theme park items from collectibles, props, figures, to just about anything that a typical pawn shop would never buy. So with all the parks in our backyard it’s really been a hidden secret that when people find us, they come back not just once, but weekly either to sell us their items or buy stuff. We take these items we buy from them and then connect them with people all over the world, which even includes celebrity clients.”

Theme Park Connection items will soon be included in an upcoming Profiles in History auction, with rare items such as a Casey’s Corner piano from Magic Kingdom’s Main Street, a Mr. Toad’s Wild Ride attraction vehicle, and a turret from atop Cinderella Castle.

More information about Theme Park Connection can be found on their web site at ThemeParkConnection.com. And for those who can’t visit their warehouse in person, their online store provides a regularly-updated inventory of Disney items for sale.

Theme Park Connection is located near West Orange High School in Winter Garden, Fla., just off Highway 50. It’s near many major intersections of Highway 50 and the Turnpike, 408 and 429. Turn at the Chevron Station on Highway 50 and Beulah. 1/4 mile on the left you will see a Ranger Park Sign. At the corner of Bealuh and Stagg Road, make a left onto Green Forest Court and follow to Theme Park Connection at 1307 Green Forest Court, Unit 110.

A look at the food options at...