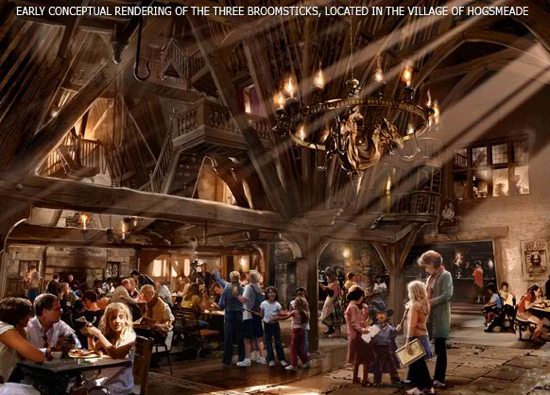 As part of the building of The Wizarding World of Harry Potter at Islands of Adventure, Universal held an online poll asking “Where would you most like to get a refreshment of snack in Hogsmead?” The winner was announced today, The Three Broomsticks, and it will be a part of the final world.

Early concept art of the restaurant can be seen above. It looks a lot like the recently closed Enchanted Oak Tavern inside to me, but there’s no official word of it becoming The Three Broomsticks.

The final vote in the poll went like this:
The Three Broomsticks 46.69 percent
Honeydukes 32.25 percent
The Hog’s Head 21.06 percent

Now they’ve added a new poll, “If you could order a drink at The Three Broomsticks, what would it be? Butterbeer or Pumpkin Juice” So far Butterbeer is winning. Visit www.universalorlando.com/harrypotter to vote.

Tip: Don’t look at the site out of interest at 1am when your speakers are turned up and you’re computer keeps freezing up.
It doesn’t go well when you have the music blasting out for a while!

I hope we get a honeydukes as well 🙂 but Definitely the Three Broomsticks is best!
And I will bet anyone the Butter Beer wins!! Pumpkin Juice is really just a vegetable after all….lol

I vote in Three Broomsticks 😀
The Three Broomsticks is an inn and pub in the all wizarding village of Hogsmeade. It is often warm, crowded, and a bit smoky, but clean and welcoming.Is a amazing place to be with friends:D

My dream of a Muppet addition to...