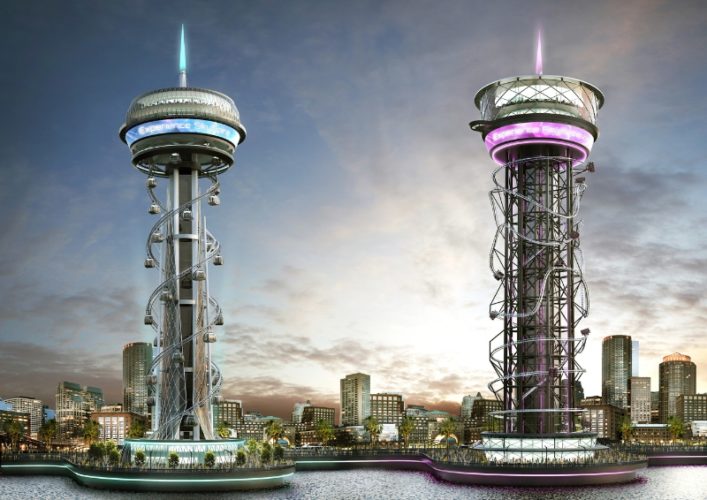 Investors seeking to speculate on something really big may be interested in ThrillCorp, the newly-formed company from veteran thrill ride developer Bill Kitchen, which is going public in seeking funding for its Polercoaster vertical thrill parks and SkySpire observation attractions.

The public will be able to invest in Bill Kitchen’s ThrillCorp for a starting price of $200. Kitchen previously invented and developed Skycoaster giant swings and iFly indoor skydiving venues which have hosted millions of riders and generated more than $2 billion in revenue. Kitchen’s new company, ThrillCorp, intends to develop, own and operate Polercoaster and SkySpire attractions across the United States.

Instead of requiring a sprawling plot of land, the Polercoaster takes the attractions of a theme park and builds them vertically, requiring only a half-acre. The Polercoaster can be configured to include a rollercoaster, drop ride, zip line, skywalk, observation deck with mixed reality and VR experiences and a tower-top lounge, creating a highly visible structure that can reach more than 600 feet in height. “This really changes the game,” said Kitchen. “We make the best park attractions more thrilling by going taller. We put them where people can use them more frequently and at a much lower cost than a theme park. We make it a casual outing as opposed to a full day’s commitment. Guests can come out for a few hours, ride a few world-class rides and shop, dine, or just stroll. It is a new category of experience.”

SkySpire also leverages vertical building. As opposed to a rollercoaster, it creates an observation experience that is a fresh new take on the Ferris wheel. It carries guests, via spiraling gondolas, to the top of a tall tower where they can disembark on an observation level that can incorporate a lounge and/or restaurant. “In a location with a beautiful view, there is no better experience than the SkySpire,” says Kitchen. “You get unobstructed 360-degree views as you ascend and then you have a self-guided tour of the surroundings in the observation level.” The SkySpire serves as an elegant counterpoint to the raucous Polercoaster. “We think of it as a kinetic sculpture,” adds Kitchen.

The company plans to fund its efforts by raising up to $50 million via a new SEC rule, called Regulation A+, that allows companies to sell shares directly to investors. “ThrillCorp has a great set of products, an experienced team, a good business model and we like the idea of a group of shareholder supporters working with us from the ground up to bring a new product to market,” said David Gust, CEO of ThrillCorp. “This is an exciting opportunity. I love Disney and Six Flags and Cedar Fair, but to create another of those parks requires hundreds of millions to billions of dollars and there are few potential locations suitable to host them. In contrast, we offer several of the most popular and repeatable rides for a fraction of that cost in a way that we think customers will use more often. We can put them in most major markets. We like our model.”

ThrillCorp believes the sky is the limit for its new attractions. Its crowdfunded offering is intended to provide the capital to develop one or more of its thrilling projects. “We believe there are 30 to 50 viable markets in the U.S. alone,” said Michael Kitchen, the company’s Chief Development Officer. “Our goal is to quickly get one of these up and running and then have a pipeline of eight to 10 additional markets waiting in the queue.” The company can develop towers in a stand-alone tower configuration, as part of larger self-contained entertainment centers, or as larger-scale entertainment malls with multiple other attractions, dining and retail offerings. It has also begun design of all-weather solutions to extend operating seasons. “We can develop on our own or partner with local developers, municipalities and national developers. We have models that work for all situations,” said Kitchen.

Note: this article is for informational purposes only and does not constitute investment advice or an endorsement of any financial opportunity.

The Weekly Rewind @Attractions – merchandise and...