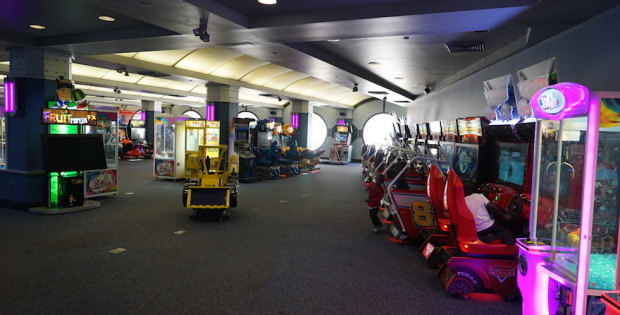 The Tomorrowland Arcade at the exit to Space Mountain at Magic Kingdom is now closed. This goes along with the Walt Disney World resort arcades getting rid of their ticket games and redemption counter.

Disney hasn’t said why the ticket games are being removed or the Tomorrowland Arcade has closed other than, “we are always evaluating our offerings and making adjustments”. But an Orlando Sentinel article gives some insight into it.

The article speculates that Disney is getting rid of their “turn in a ticket for a prize” and claw machine games because they are being extra careful to avoid violating Florida state’s 2013 legislation banning Internet cafes. The law states that you can’t win prizes worth more than 75 cents, and that the games need to be coin operated. Disney arcades use a card with credits.

The Tomorrowland Arcade didn’t offer redemption games, but it’s thought to have closed so the games there could be moved to the resort arcades as a replacement for the ticket games which are being taken out. There’s no word on what will be done with the Tomorrowland Arcade space. It’s currently behind temporary walls. The Disney resort arcades will remain open, but only with games that offer no prizes.

The Willis Clan to perform at Raglan...