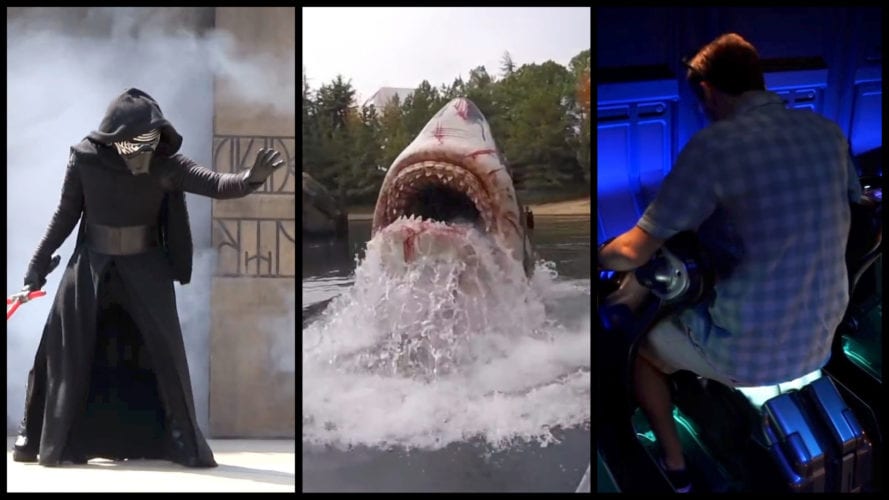 2017 saw a lot of changes in Central Florida and beyond, and we were there bringing you coverage of it all. Here’s a look back at the top 10 videos from our YouTube channel in 2017.

Ever since we started branching out from Orlando and giving more focus to theme parks around the world, we’ve noticed that video from the parks in Japan are very popular, especially at Tokyo Disney Resort and Universal Studios Japan. Four out of the ten videos come from both places.

NOTE: Many of our most popular videos viewed in 2017 were uploaded in past years, but unless noted, these videos represent the top 10 that were recorded in 2017.

2017 saw several classic attractions around Orlando come to an end. One was the opening day Epcot attraction, The Universe of Energy. Fans lined up to be among the last to ride it on Aug. 13, 2017, but the final ride did not end up going as planned. Take a look at the video above to see the unique way riders were able to say goodbye.

The first video on this list from Japan, this version of the Indiana Jones Adventure at Tokyo DisneySea featuredjust about the same track layout as its counterpart at Disneyland in California, but the storyline and visuals here are completely different.

We recorded this video the day before this version of the show closed on Jan. 16, 2017, but it picked up a lot of views once the attraction reopened with an updated show and a Trump animatronic.

A unique hybrid of family raft ride and rotating Ferris Wheel, the first prototype Slidewheel from German manufacturer wiegand.maelzer GmbH was successfully tested this past year in Europe. Would you take a ride?

This is the second year in a row that a video showcasing updates to this show has made the top 10 list. Jedi Training: Trials of the Temple lets kids at Disney’s Hollywood Studios live their Star Wars dreams. This video was almost lower on the list, but with Star Wars: The Last Jedi hitting theaters recently, the views skyrocketed.

During a trip to Asia last holiday season, our owners were able to get new and updated ride POVs for our YouTube channel. One of the updated videos they got was of the Tower of Terror at Tokyo DisneySea. Fans of the Tower of Terror at Disney’s Hollywood Studios will see that this version of the attraction features a completely different storyline.

One of the biggest things to happen in 2017 was the grand opening of Pandora – The World of Avatar at Disney’s Animal Kingdom. One of the rides, Avatar Flight of Passage, features a unique restraint system not often seen. People were curious how the restraint worked and if it would be accommodating for bigger guests.

There’s nothing like a cute animal video, and Amy Schumacher was gracious to provide us with one from SeaWorld Orlando at the newly remodeled Dolphin Nursery. As you can see, these dolphins were very curious with a couple of visitors to the area.

NOTE: The top 2 videos were both posted on Dec. 30, 2016, but I am counting them on this list because their views were basically all accumulated in 2017.

Universal Studios Japan has a lot of familiar elements when compared to its Florida counterpart, but it’s also full of unique offerings. This street show in the Jurassic Park section of the park not only features raptors like the ones at Islands of Adventure, but also a triceratops and spinosaurus!

Even though The Jaws Ride closed at Universal Studios Florida in 2012, it’s still alive and well in Japan! Jaws Ride videos always seem to be popular, and this one is no different, having accumulated over 10 million views in one year. Aside from the spiel being in Japanese, the ride is basically the exact same as it was in Florida.

Was one of your favorite videos represented in this list? If not, let us know what your favorite “Attractions Magazine” video from 2017 was! We’ll be continuing to give you videos from Central Florida, California, and around the world, so you don’t want to miss any of our videos in 2018. Click here to subscribe to our YouTube channel at youtube.com/attractionsmagazine.