Top 10 most popular theme park and attraction videos for 2011 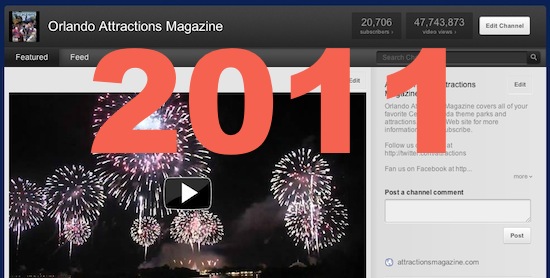 It’s time to count down the top 10 most viewed videos that we posted in 2011. It’s a mix of Star Wars, Mickey Mouse, Justin Bieber and more.

We have videos with many more views than these, but they were posted before 2011. Also keep in mind that videos we posted earlier in the year have had more time to get views, but we do have a couple of later-in-the-year contenders. Let’s count them down …

POV ride on the AquaDuck Water Coaster onboard the Disney Dream
Take a ride on the unique clear tube slide on Disney’s newest cruise ship.

2011 Cinderella Castle Christmas Lighting at Magic Kingdom
Even though it’s the same show each year, many people are interested in seeing the latest version.

Mickey Mouse shows you around backstage at Town Square Theater
Our videographers got a personal tour by Mickey and Minnie of their new location.

American Idol Scotty McCreery sings “I Love You This Big” at Disney World Hollywood Studios
Scotty has a lot of fans. Many liked his religious comments in this video.

Peter Pan’s Flight ride-through at Magic Kingdom
There’s nothing special about this video, as it’s just a regular ride-through of the attraction, but I guess Peter is popular this year.

Justin Bieber singing for the Disney Parks Christmas Day Parade
You can see his whole performance at ABC.com in the full parade video.

Star Tours 3D full walk-through and on-ride footage
This video not only shows the remodeled queue, but also some of the footage used in the ride.

“Orlando Attractions Magazine – The Show” – Episode 25
I’m not sure why this one episode of our show received so many views, but we’re not complaining. I believe it’s our coverage of the “Cars” event at Downtown Disney that most people are interested in. But this show also featured Give Kids the World, the AMC Dine-In theater and Star Tours.

Stay tuned for another year of attraction videos and shows. By watching and sharing your favorites with friends on Facebook and Twitter, you help decide which make the list next year.

We’ll leave you with this week’s The Show featuring the 2011 year-in-review:

Celebrate the Year of the Ox with...