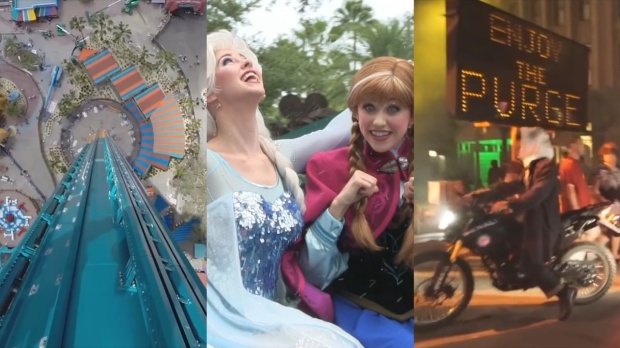 It was a big year for Orlando’s theme parks, and we were there covering all aspects of it. We wanted to take a look back at the top 10 videos from our YouTube channel in 2014.

It’s no surprise that Frozen takes up half of our top 10 list, with four of the five videos in our top five. Even with that, there were still a couple of surprise hits for us, which you’ll see in our list below.

Though this was posted late in the year, this CGI rendering of the world’s tallest coaster coming to Orlando became very popular quickly due to just how crazy this coaster looks to some people. Comments range from those looking forward to riding it to those who wouldn’t dare.

We provided this look at Elsa from Frozen starting the finale of the Frozen fireworks from the Frozen Summer Fun event at Disney’s Hollywood Studios. This is not the full fireworks show (that is later in the list), but just a video focusing on Elsa.

Sometimes you never know what videos will become popular and generate many views. This video of the 25th anniversary parade for Disney’s Hollywood Studios went viral not long after posting it.

Falcon’s Fury is a unique ride at Busch Gardens Tampa that features an element never done before on a drop tower. When the park released the first look at the POV during testing, many people wanted to see what the experience would be like when it opened. Click here for a look at our hosts on the ride.

5. Highlights from Frozen on Ice presented by Disney on Ice

When Disney on Ice presents Frozen debuted in Orlando, we were there to cover it and posted some highlights of the show. With the popularity of Frozen and the need of viewers to see the first glimpse of this new show, this video rose to the top five of the year.

This is the full look at the Frozen fireworks that displayed during the Frozen Summer Fun event at Disney’s Hollywood Studios. This event was the first big Frozen celebration to be done at the Disney Parks, and with it happening in the midst of the Frozen popularity, it’s no wonder that three of our top five videos from 2014 are from this event.

The only video in the top five that’s not Frozen-related – this meet and greet featuring the stars of Big Hero 6 just debuted in November. This was their first public meet and greet at a Disney Park, and with the popularity of the new animated film, people were anxious to get their first glance at these characters meeting guests.

The Royal Welcome procession during the Frozen Summer Fun event was a mini-parade down Hollywood Boulevard featuring the first appearance of Kristoff. It ended at the Sorcerer’s Hat stage with a small sing-along to “Let It Go” with the crowd. Guests would line up over an hour in advance to see this procession in person.

With over three million views and counting, this full look at the new Frozen Sing-Along show at Disney’s Hollywood Studios quickly became our most viewed video in 2014. The show has proved so popular with guests that it was added indefinitely to the park, and even brought over to Disney California Adventure.

Was one of your favorite videos from us represented in this list? If not, let us know what your favorite Attraction Magazine video from 2014 was! Don’t miss any of our videos in 2015. Click here to subscribe to our YouTube channel at youtube.com/attractionsmagazine.