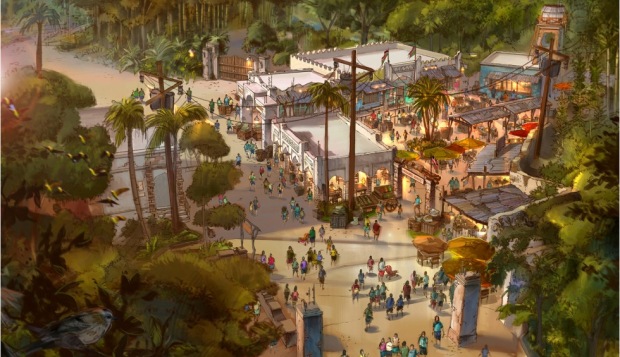 There is a lot going on at Disney’s Animal Kingdom. From Avatar to Rivers of Light, the park is undergoing its largest expansion in history. Another new element of is coming to Africa this spring.

Imagine the colors, scents, tastes and activities of a village marketplace in Africa. That scene is coming to Animal Kingdom with a spring opening planned for Africa Marketplace – a new shopping and dining option for park-goers in Harambe, the village anchoring the Africa section of the park.

One highlight of the new space will be Harambe Marketplace, a new quick-service food and beverage location offering street-inspired dishes from walk-up windows. Guests will find plenty of shady places to relax and eat. For their convenience, the new space also will open up a new pathway from Africa to Bradley Falls and the Asia section of the park.

Together with the new Harambe Theatre housing “Festival of the Lion King,” the addition of Africa Marketplace will double the size of the original Harambe Village. Paired with previously-announced projects throughout the park, Disney’s Animal Kingdom is undergoing the largest expansion in its history.

This is some of the best news to come out of AK in a long time!
I’m very, very Happy!