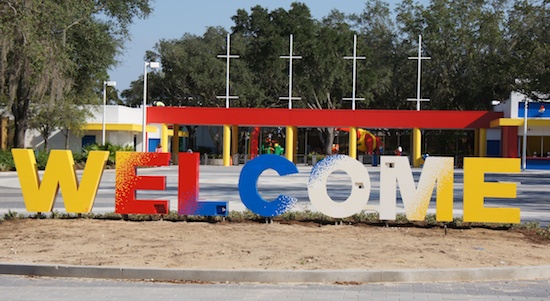 We were invited to Legoland Florida today to get a sneak peek at their Miniland USA land and take a ride on Lost Kingdom Adventure. Here are some photos and videos, for our full report, be sure to watch episode 42 of Orlando Attractions Magazine – The Show (Releases Oct. 22, 2011).

The park doesn’t officially open until Oct. 15, 2011. So you’ll see some out of place things in these photos and videos. Although much of the park is complete, many finishing touches are still to come. 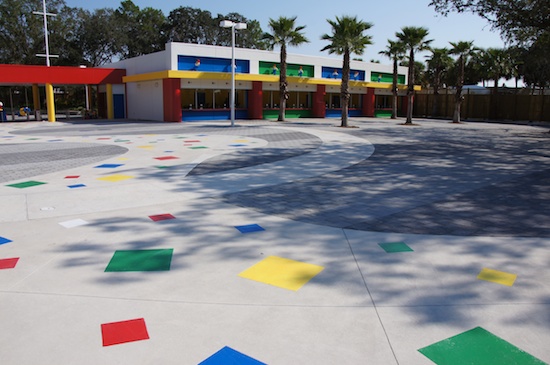 Here’s a look at the entrance area outside of the turnstiles. Notice the Lego figures above the ticket windows. 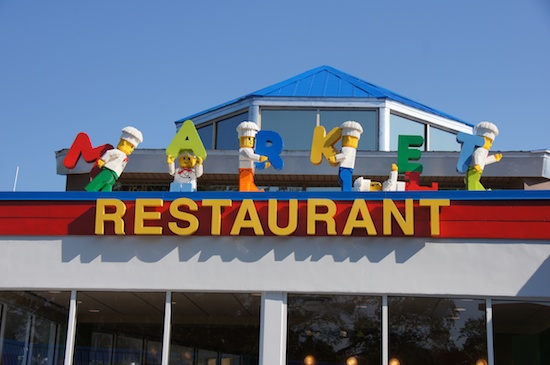 Lego figures hold the restaurant sign near the front of the park. 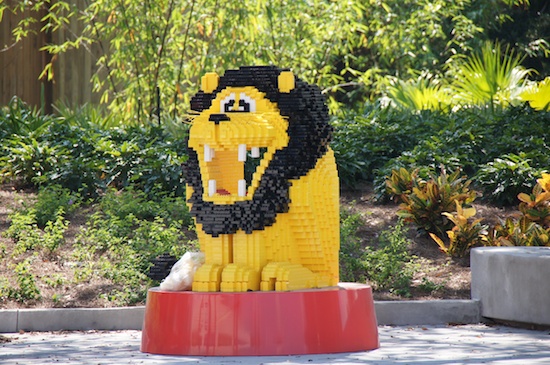 There are a couple of Lego models that used to be located at the Downtown Disney Lego store. This lion is one of them. 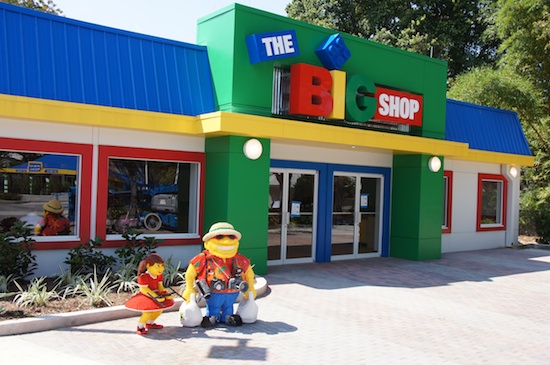 Also near the front of the park is this main location for all your Lego shopping. Of course smaller shops are located throughout the park. 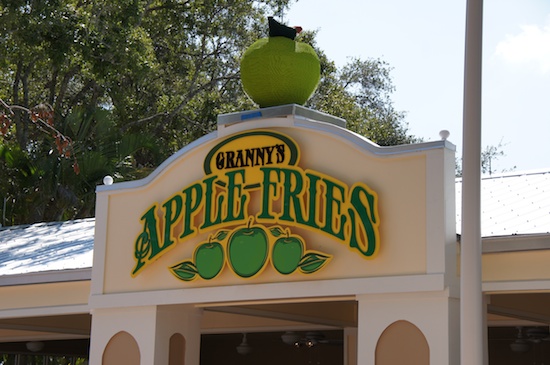 If you’ve ever been to one of the other Legoland parks, you know these fried apple sticks are delicious. 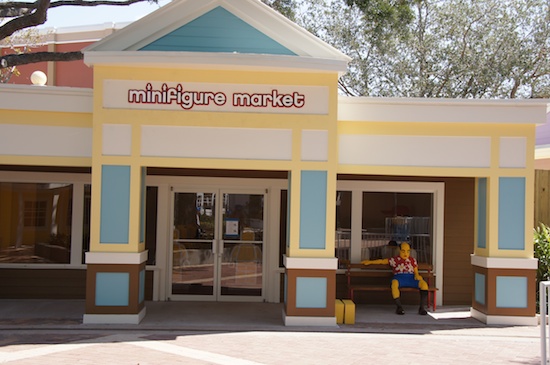 This grandpa sleeping outside the mini figure store may also be recognizable to those who’ve been to the Downtown Disney Lego store. 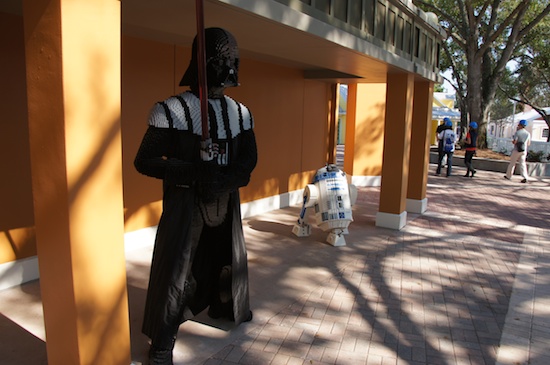 Lego Darth Vader and R2-D2 stand outside a store that will offer licensed Lego sets such as Star Wars. 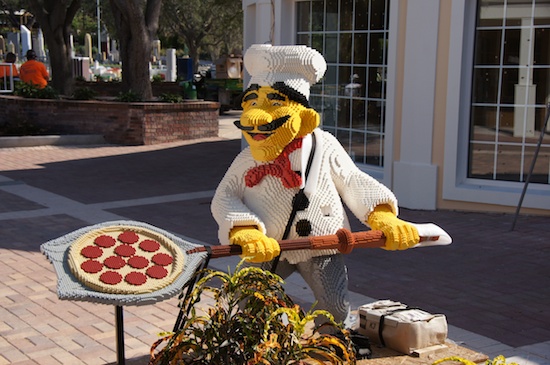 Many Lego characters are located throughout the park. Some, such as this pizza chef, aren’t fully bolted down yet. So this may not be his final location. 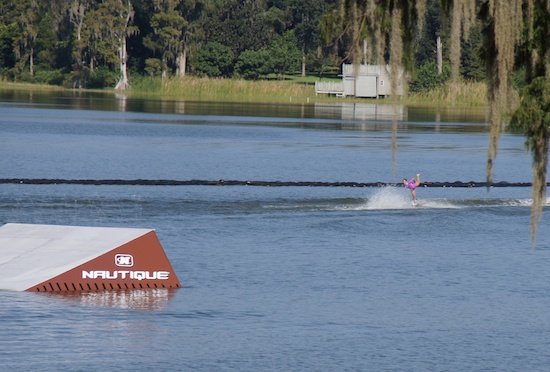 Skiers were practicing for a Lego-themed ski show.

The Miniland USA area is not mini at all. It is spread over a large area. guests may spend hours here looking at all the details. 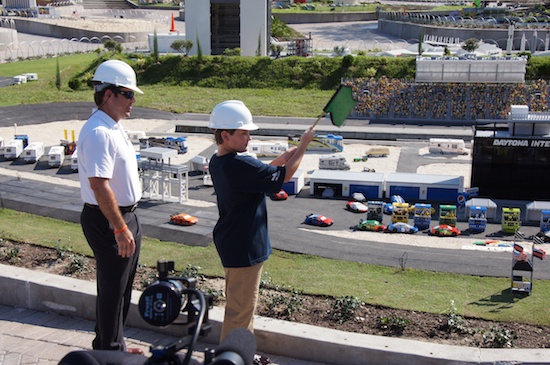 Joie Chitwood III, the president of Daytona International Speedway and his son were on hand to waive the green Lego flag as a mini car raced around the mini version of the speedway. 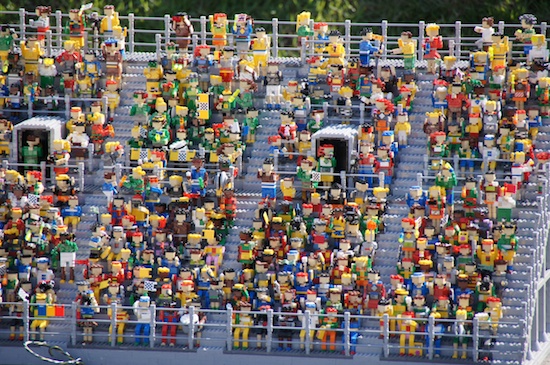 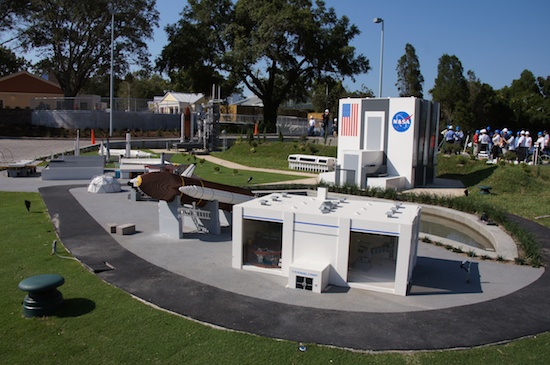 All of the Florida areas of Miniland are exclusive to Legoland Florida. Here’s a look at the Kennedy Space Center miniland. 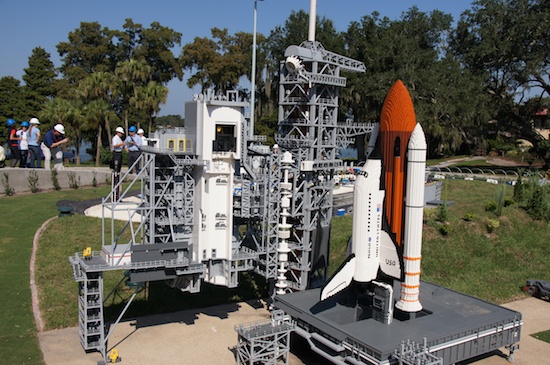 A space shuttle is ready for takeoff. 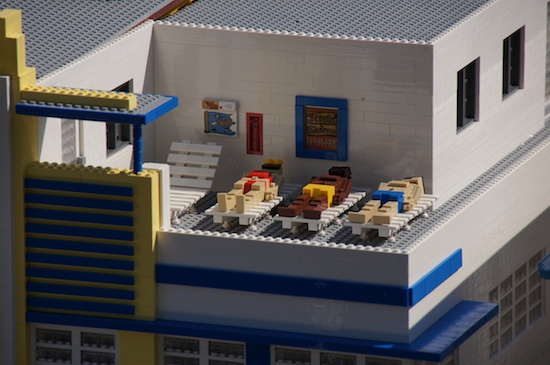 Some Florida sunbathers soak up the rays on a Lego building roof. 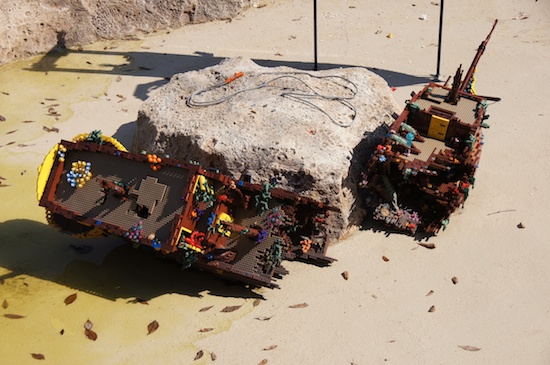 This wrecked ship will be underwater once the park is finished. 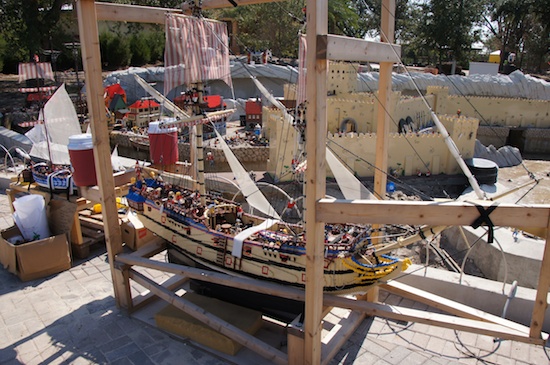 A pirate ship is ready to be installed in the Pirate Miniland area. This area is also exclusive to Legoland Florida. 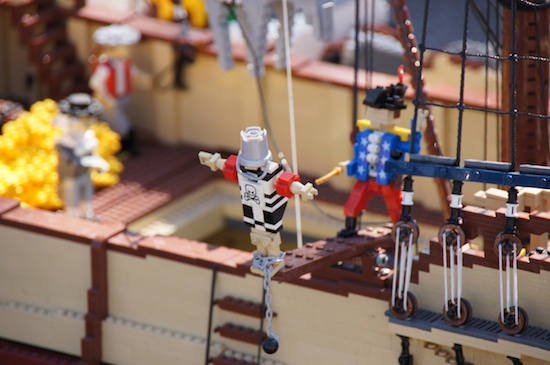 Time to walk the plank. 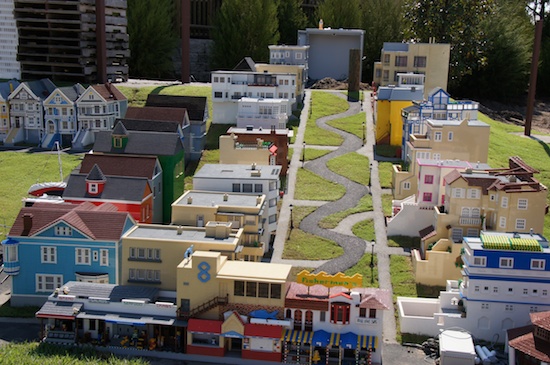 This street should look familiar to those who have been to San Francisco. 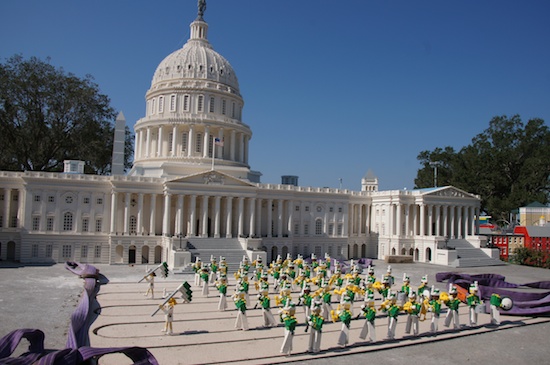 Once open, these figures will march back and forth. 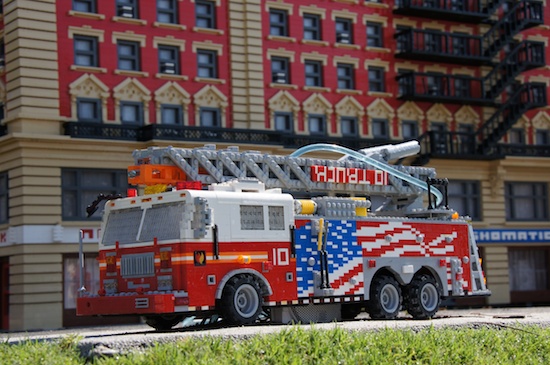 A patriotic-looking fire truck sits on the street in the New York City area. 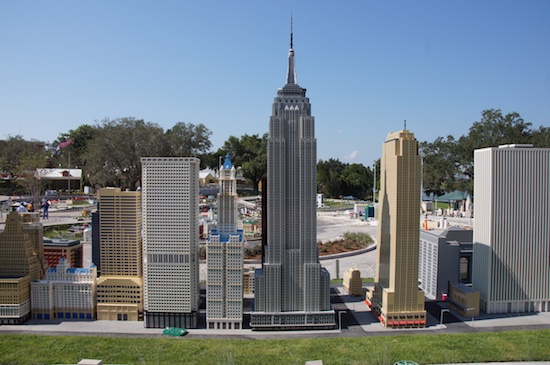 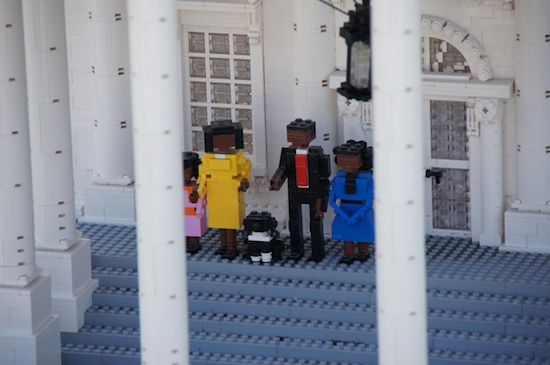 The president and his family are standing in the front of the White House in the Washington D.C. part of Miniland.

Take a look at our video tour of Miniland USA: 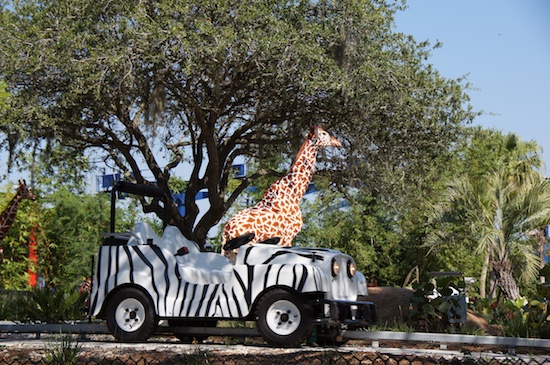 On our way to ride the Lost Kingdom Adventure, we passed by the Safari Trek ride. 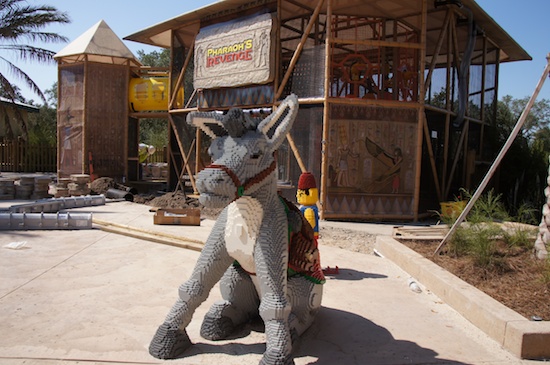 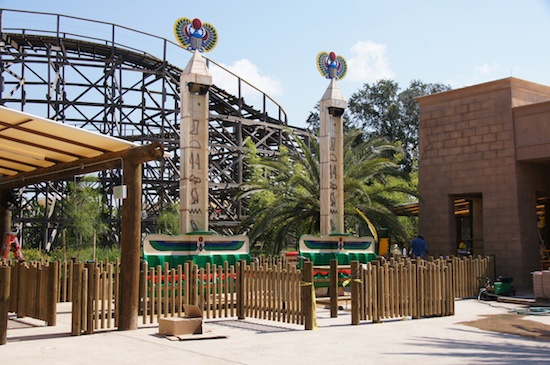 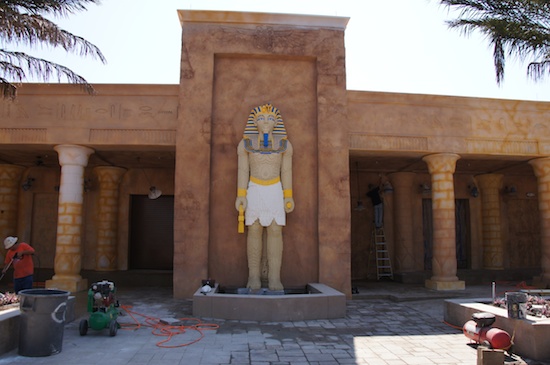 This is the outside of the Lost Kingdom Adventure attraction. 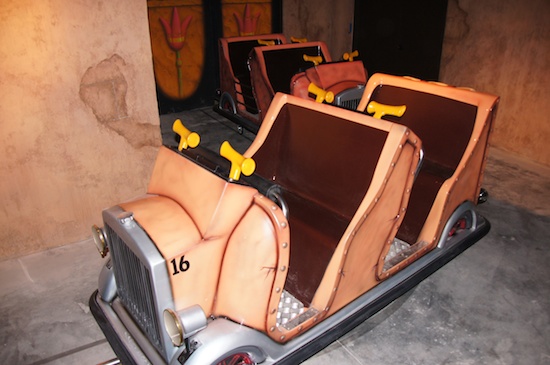 Here’s a look at the ride vehicle. 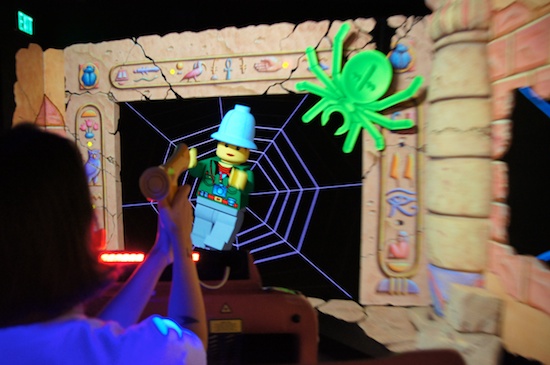 The ride is similar to Men in Black or Buzz Lightyear’s Space Ranger Spin, in that you shoot at targets to trigger movements in the ride and add to your score. We heard there may be a secret target near the end of the ride for big bonus points.

Here’s a complete ride-through video of the Lost Kingdom Adventure, but it’s much more fun when you’re shooting and saving the day.

Legoland Florida is located in Winter Haven, Fla., about 50 minutes from Walt Disney World. The grand opening will be held Oct. 15, 2011.

SeaWorld and Disney offer Halloween fun for the whole family

Was the darkride built by Sally Corp?

Reid: Yes it was.

Legoland Floira looks like it is going to be lovely – some scenes are very like ones in Legoland Windsor, but with more sun!

We were at Legoland Florida today to pick up our annual passes so we would be ready to enter the new park on special preview days and got a glimpse through the gates. This place is going to be exciting even if you’re not between 2 and 12 years old! I hope people are going to turn left when they exit the park and have a meal and experience Winter Haven before trudging back home or to their next destination. Winter Haven has some excellent accomodations as well which includes some hotels that are family friendly priced. Did you have a chancde to visit Winter Haven itself when you were at Legoland Florida?