Track Rita online, the largest manatee ever released by SeaWorld 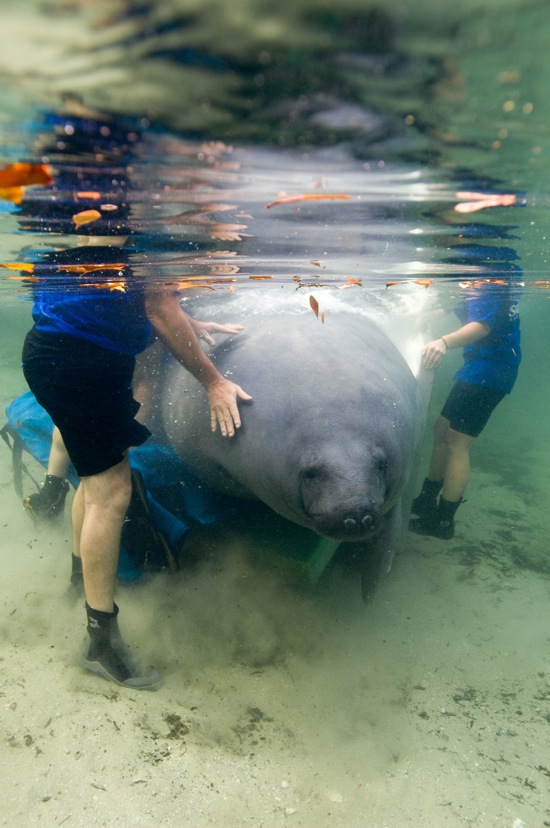 SeaWorld’s Animal Rescue Team recently used a crane to released Rita, the largest manatee the park has ever cared for. The 12-foot-long, 3,000-pound female was released into Blue Springs on Thursday, Feb. 26. Due to her immense size, SeaWorld’s rescue team had to utilize the heavy piece of machinery to lift and lower her into the spring.

She is being tracked via satellite and closely monitored in her new home. Manatee enthusiasts can follow her daily track online by visiting www.seaworld.org.

Rita was rescued in 1982 – more than 26 years ago – from the Banana River in Merritt Island because her right pectoral flipper was entangled in a crab trap; the injury forced SeaWorld vets to amputate. A state-mandated quarantine for the papilloma virus (PV) kept Rita at SeaWorld longer than expected. At the time, wildlife officials feared this virus could be spread to wild manatee populations and it was thought Rita may have been exposed. Recently completed research shows that PV already exists in the wild and provides no threat to wild manatees.

SeaWorld also released Amber, a 9-foot-long, 1,300-pound, female manatee that was rescued from Blue Springs in 2001.

Last weekend for Bud & BBQ at SeaWorld and Busch Gardens

I don’t believe she is the largest manatee in the world.

Me neither believe you just write that!

Issue 5 of Orlando Attractions Magazine is...