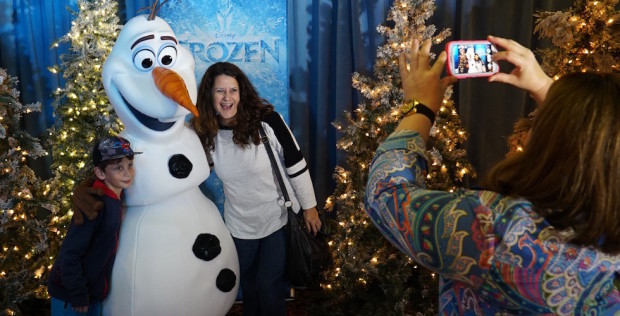 According to Shawn Slater on the Disney Parks Blog, one of the new meet and greet locations will be situated in the Echo Lake area of the park and called Celebrity Spotlight. When it opens, guests will be able to meet Olaf from the Disney animated film “Frozen.” This will mark his first ever public meet and greet at Walt Disney World.

The description for Celebrity Spotlight calls it “the perfect place for a dream encounter with one of Disney’s latest stars,” meaning we could see the characters here rotate occasionally, similar to a location inside the former Magic of Disney Animation.

The second new meet and greet location is called “Mickey and Minnie Starring in Red Carpet Dreams” and will be found across from the Sci-Fi Dine-In Theater Restaurant inside the former American Idol Experience audition facility. Inside, “you’ll walk the red carpet and step into a scene with Minnie, where she appears as a Tinsel Town starlet in a ritzy setting straight out of a lush and colorful musical extravaganza. Nearby, you will find Mickey portraying his iconic role of the Sorcerer’s Apprentice from “Fantasia.””

Both character experiences are scheduled to open this spring at Disney’s Hollywood Studios. Here’s a look at Olaf’s meet and greet at Disney California Adventure:

I LIVE IN ILLINOIS AND THE MAD TEA PARTY WAS MY FAVORITE ATTRACTION. I AM VERY SAD TO SEE IT GO. MY WIFE AND I ARE NOW TRYING TO GET BACK OUT THERE BEFORE IT CLOSES ON MARCH 30. WE ALSO GO OUT TO CALIFORNIA ADVENTURES EVERY NEW YEARS EVE. WE WERE COUNTING ON THE TEA PARTY BAND PERFORMING THEN. WE WERE THERE NEW YEARS EVE DEC 2014 WHEN THE FROZEN SHOW WAS THERE INSTEAD OF THE TEA PARTY AND IT WAS BORING.