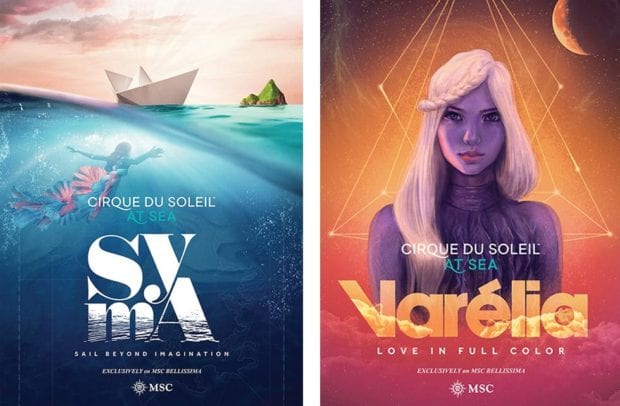 Cirque du Soleil’s Syma and Varélia debut aboard the MSC Bellissima in 2019.

On Dec. 5, MSC Cruises revealed details of Syma: Sail beyond Imagination and Varélia: Love in Full Colour, the two new Cirque du Soleil at Sea shows that are being created for MSC Bellissima, MSC Cruises’ newest flagship coming into service in March 2019.

Syma: Sail beyond Imagination takes audiences on the epic journey of a young sailor, who braves the elements, plunges into troubled waters and discovers the mysterious island of his dreams, populated by surreal, and colourful creatures. The show features immersive video images, an original set design, bioluminescent lighting and acrobatic feats.

Varélia: Love in Full Colour traces the future/medieval courtship between a princess with distinctive violet skin and a hero who is blind. Their budding romance is thwarted by a villain who, in a fit of madness, kidnaps the royal. With the help of his friends and a laser show, the brave young hero rescues his beloved using acrobatic feats.

The new Cirque du Soleil shows will be performed in the Carousel Lounge, a purpose-built immersive entertainment venue positioned at the aft of the ship on deck 7, which hosts just over 400 guests each night. With an investment of €20 ($22.6) million each, the lounge features state-of-the-art technology, including a 360° rotating stage with seating all around, a 131-foot-long LED screen, and additional new special effects.

The long-term partnership between MSC Cruises and Cirque du Soleil first began in 2013, and will include a total of eight original shows, exclusively on MSC Cruises’ Meraviglia generation ships coming into service between 2017 and autumn 2020. MSC Meraviglia was the first ship to debut the new Cirque du Soleil at Sea concept with the launch of the two shows Viaggo and Sonor last June. MSC Grandiosa will launch next year in November, and MSC Virtuosa will launch in October 2020.

Pierfrancesco Vago, MSC Cruises’ Executive Chairman commented, “The partnership with Cirque du Soleil is truly special. With the creation of Cirque du Soleil at Sea we wanted to bring our guests the very best in onboard live entertainment and more importantly something that they would not be able to see anywhere else in the world. As a family company, all our strategic partnerships are built on shared values and a shared vision – a true collaboration from beginning to end. With Cirque du Soleil at Sea we wanted to bring yet more innovation to our entertainment offering and this began with the bespoke design and construction of the state-of-the-art entertainment lounge – the only such venue at sea – through to the creative development of the shows, where we are involved every step of the way from early conception right through to final delivery of the shows.”

Yasmine Khalil, Chief Executive Producer, Cirque du Soleil & President, 45 Degrees stated, “We are thrilled to embark on our second MSC Cruises ship as we pursue Cirque du Soleil’s journey at sea. We could not have wished for a better partnership where thanks to the purposely built theatre, the Carousel Lounge, our teams can unleash their creativity and continue to push the boundaries of entertainment at sea. Joining Viaggo and Sonor, our first two shows on MSC Meraviglia, Cirque du Soleil continues to reinvent itself through an intimate theatre experience where two new shows are created exclusively for MSC Bellissima, which promise to take MSC Cruises’ guests on an entirely new journey. We look forward to reveal some of the details of these 2 new shows.”

Mr Vago continued, “It is really quite incredible that we will develop together eight original shows, two for each of the initial four Meraviglia Class ships. Every element of each show is unique from the concept and storyline, the characters, the costumes and make-up through to the music, staging and sound effects. This is unparalleled within the cruise industry and means that guests are able to experience original, truly distinct and spectacular Cirque du Soleil at Sea shows only on board our Meraviglia generation ships.”

The artists for the new shows have now been cast and after training at Cirque du Soleil Headquarters in Montreal, Canada the team will soon leave to embark on board MSC Bellissima where final preparations will be underway.

Cirque du Soleil at Sea is a pre-booked experience for guests that is not included in the standard fare, and can be booked in advance, or whilst on board during the cruise for any still available seats. Guests can either book to eat a three-course menu served before the show (€35, $39). Or sip on a specialty cocktail (€15, $17) and watch the pre-show that begins 30 minutes before the start of the Cirque du Soleil at Sea performance.

To find out more about Cirque du Soleil at Sea visit here, and watch these videos for more Cirque in Orlando:

Universal Orlando’s holiday treats and where to find them