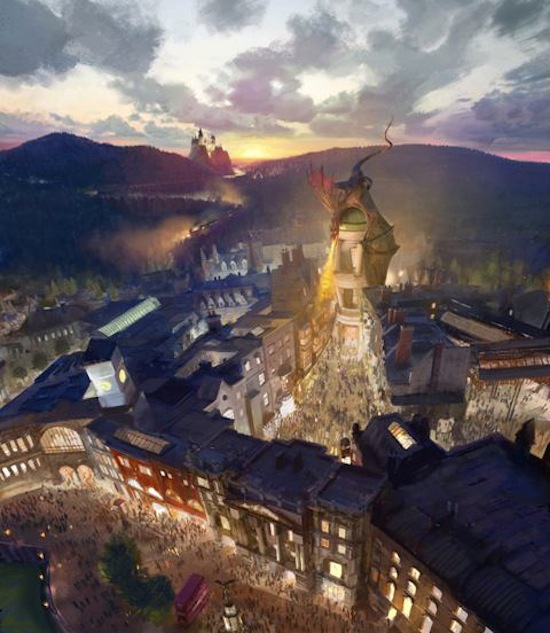 Scheduled to open in 2014, the world’s first centrally themed, multi-park experience expands The Wizarding World of Harry Potter across both Universal Orlando theme parks and allows Universal’s creative team to bring an unparalleled vision to this unique project. The new area will bring to life some of the experiences and places found in and around London in the Harry Potter books and films, offering brand-new adventures for fans and theme park guests from around the world.

To bring Diagon Alley and ‘London’ to life, Universal’s creative team is working closely with Warner Bros. and the production design team from the Harry Potter films – just as it did for Hogwarts and Hogsmeade.

“I’m so pleased that The Wizarding World of Harry Potter has proved so popular to date, and I’m sure that the attention to detail in creating the new Diagon Alley area will make this an even better experience,” said J.K. Rowling.

“We are continuing the journey and adding an entirely new level of adventure,” said Tom Williams, Chairman of Universal Parks & Resorts. “And we are bringing the same drive, commitment, enthusiasm and innovation to this project as we did to the first.”

“We are thrilled to offer the legions of fans the opportunity to embark on this new journey and experience Diagon Alley as it was brought to life in the books and films,” said Brad Globe, president, Warner Bros. Consumer Products.

The new area is expected to include a Gringotts Bank indoor roller coaster, a themed restaurant, shops and the Hogwarts Express will transport multi-park ticket holders between Universal Studios and Islands of Adventure where the current Wizarding World of Harry Potter is located. The train will run backstage, but guests will be looking at video displays of the U.K. countryside and scenes from the Harry Potter movies instead of windows. Click Here to view a detailed look at the concept art for the new area.

UPDATE: Nov. 5, 2013 – The Travel Daily UK has reported that the restaurant in Diagon Alley will be based on The Leaky Cauldron. “Speaking at World Travel Market, Mike West, executive producer at Universal Creative revealed the new London-themed area will include a Leaky Cauldron restaurant as well as a main attraction based on Gringotts Bank.”

Here’s our current construction update for May, which includes a look at the concept art:

Grand opening of the original Wizarding World back in 2010:

Who is doing the promotions for Universal Orlando?
The most exciting project going on in Orlando (maybe the world) and a simpel facebook announcement with 1 piece of concept art is what we get.
Still, ofcourse, looking forward to this but this publication is a bit underwelming.

Jim Hill has some concept art to go with the announcement. It’s pretty cool – I really hope that dragon is still there.

He has the same concept art we posted above. Check our other post for a detailed look at it.

So basically it’s just more Harry Potter silliness. Amazing. So basically they said “Hey let’s cater to the same exact audience that we already have coming to the park.” Genius. Meanwhile they destroy one of he coolest attractions and further push out their actual fan base.

10 to 15 years from now will be a very interesting time for Universal Studios. Lots of Wizard nonsense to bulldoze.

Yea absolutely terrible that they cater to what fans have broken records at the park to go visit with more. Of course it’d be nice to have been able to keep Jaws and BTTF but sometimes the locations and visitor numbers just can’t warrant it with the promise of new sure fire hits. The shelf life on this franchise (and plethora of material to draw from) is arguably far more dense, marketable and (excuse the pun) universal than any other Universal attraction to date.

Yeah, I was thinking the same thing. For a pretty major expansion to get a little Facebook announcement is kind of ridiculous. I guess Universal is just relying on the rabid Potter fans to spread the word, so they don’t have to spend any money on organizing a proper press conference/real life announcement.