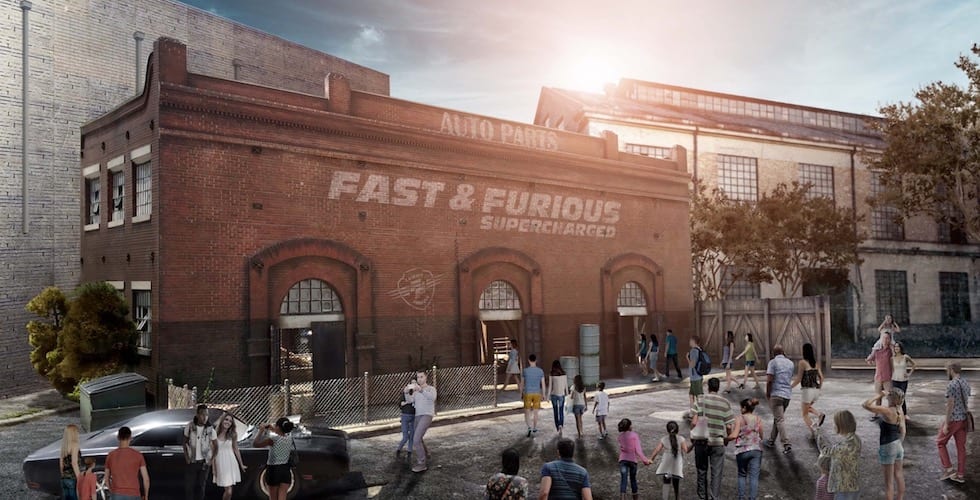 An artist’s rendering of the entrance to Fast & Furious – Supercharged.

Universal Orlando Resort has released new details on their upcoming attraction, Fast & Furious – Supercharged, which is set to open in spring 2018.

The newest installment in the “Fast & Furious” universe will open with Universal Orlando’s new attraction. Guests will be able to live out the excitement from the films in an exciting, thrilling ride experience.

An artist’s rendering of the “Fast” vehicle viewing area in the ride queue.

Fast & Furious – Supercharged will be the only place where guests can see and take photos with 15 “Fast & Furious” cars – many of which were driven by some of the “Fast” family members. Each vehicle is crafted by Dennis McCarthy, the man behind the cars for the films. Some of the cars on display will include Dom’s Dodge Charger and Letty’s Turbo Truck.

Riders on Fast & Furious – Supercharged will be able to select a time through the official Universal Orlando Resort mobile app or at kiosks located near the attraction’s entrance. This will be the second attraction to utilize the “Virtual Line” feature at Universal Studios Florida, with Race Through New York Starring Jimmy Fallon being the first. Universal’s Volcano Bay also utilizes Virtual Line.

This new attraction will feature an original “Fast & Furious” story that expands upon that of the film series. When approaching the ride building, guests will see Dom’s Dodge Charger parked outside, letting guests know that they are entering the underground headquarters of the “Fast” family.

Songs from the films’ soundtracks will fill the queue rooms as scenes from the movies play. Guests will travel through recognizable locations like the Family Room and Tej’s high-tech War Room.

Fast & Furious – Supercharged will have party bus-themed ride vehicles, similar to those on Skull Island – Reign of Kong.

Guests are then invited to attend a race after-party that can’t be missed, and Tej will arrange for a custom party bus to take everyone there. The buses will be similar to those of Skull Island – Reign of Kong.

On the way to the party, Dom calls in a panic – Owen Shaw is headed straight for the party bus. A high-speed chase begins, and guests must trust that the “Fast” family will save them. Will that be enough to keep everyone safe from Shaw’s clutches?

More details on the ride will be released as the opening date approaches. Fast & Furious – Supercharged opens in Universal Studios Florida next spring.

Check out a behind-the-scenes video, and our video of Universal Studios Hollywood’s version of the ride on their backlot tour below:

Take a glimpse at the Yule Ball at Warner Bros. Studio Tour London this holiday season

I am pretty disappointed that Universal is still going in the direction of 4D rides It became really stale after King Kong 360 3D in Hollywood. It would be cool if they were to do like a Radiator Springs type of ride where you are strapped onto a car and race another vehicle.

Trade your legs for fins with Mermaid...