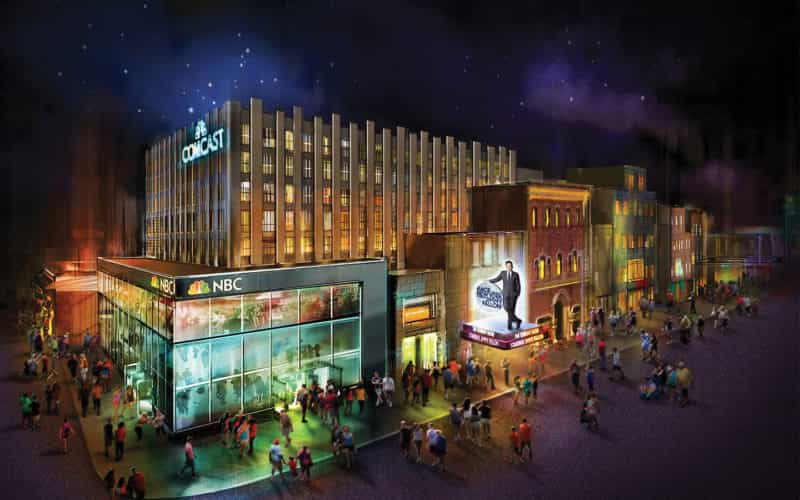 The Tonight Show is taking over the former home of the Twister attraction at Universal Studios Florida, and the resort has just released new details on next spring’s Race Through New York Starring Jimmy Fallon ride.

Race Through New York Starring Jimmy Fallon begins as guests enter a recreation of NBC’s famous “30 Rock” complex, home to Fallon’s Studio 6B, where they can experience a club-like pre-show environment. While awaiting their turn to ride, guests may enjoy a live performance from the Ragtime Gals barbershop quartet, or check out some of the show’s classic bits, from History of Rap to Lip Sync Battle. They will also have the chance to meet and dance with the beloved “Tonight Show” mascot, Hashtag the Panda. They can even play host at their own Interactive Desk in the Studio 6B Club. Here, guest will be able to send Jimmy Fallon’s famous Thank You Notes to your friends and family, prep for their race with a ‘Jimmy Drive’ retro-style video game, and watch show clips.

After a briefing in the Studio 6B Lobby, guests will board what Universal calls “the world’s first-ever flying theater,” which seats up to 72 audience members, for a race alongside Jimmy Fallon through New York City. From 30 Rock out into the streets (and the skies) of The Big Apple, studio audience members will zoom past iconic New York City landmarks in an action-packed race with plenty of twists and turns along the way. 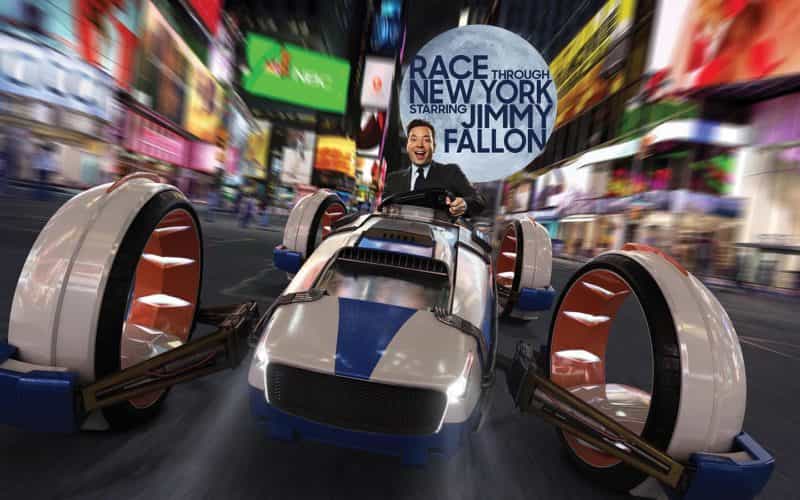 Universal has not confirmed what ride system will be used for their “flying theater,” but from descriptions it seems similar to these systems developed by CAVU and Dynamic Attractions:

Here’s a look at another alternative from Falcon’s Creative Group that we spotted at last year’s IAAPA event:

Model of a flying theater we saw during our visit to @falconscg – Not sure if it’s the one being used #FallonRide but should be similar. pic.twitter.com/w74QQx1WoD

During the ride, be sure to keep an eye out for cameos from familiar characters like Sara from “Ew,” Jimmy in “Tight Pants,” and “Tonight Show” announcer Steve Higgins. The sounds of New York will come to life with the help of the Grammy award-winning band, The Roots, the musical masterminds behind the original attraction score.

As guests step foot into the renowned NBC Studios, they can witness significant moments in the history of NBC as they travel through the 62-year evolution of “The Tonight Show.” Making their way through “The Tonight Show” lobby, guests will also get the once-in-a-lifetime opportunity to see real set pieces from one of the longest-running shows in television history. Everything from suits of past hosts, to iconic desk props, to NBC video cameras used to record the show, all surround a display honoring the current host, Jimmy Fallon.

For a behind the scenes look at how “Race Through New York Starring Jimmy Fallon” is shaping up, check out this video below:

The Making of Race Through New York Starring Jimmy Fallon

Should there be a manatee emoji? Lowry Park Zoo has started a petition