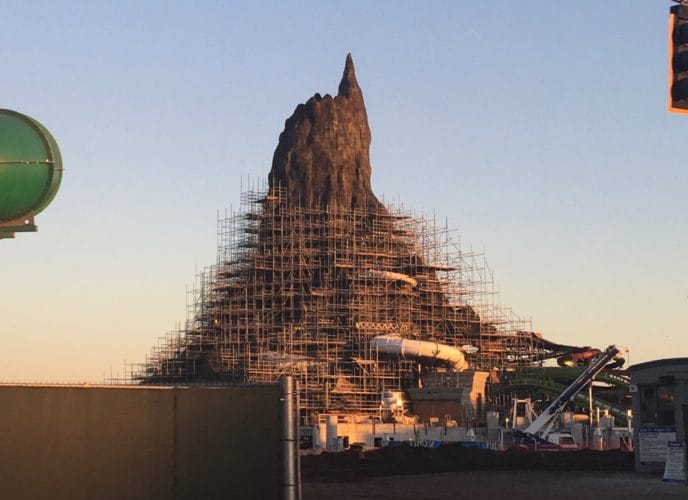 Scaffolding has started to come down around Universal’s Volcano Bay, which will have its grand opening on May 25, 2017.

Get your swimsuits and sunscreen ready, because Universal Orlando has announced that the Volcano Bay grand opening is set for May 25, 2017.

Universal will mark the debut of their new water park with a week of special media events, culminating in the Volcano Bay grand opening ceremony on Thursday, May 25. The new park, which opens about five months after the closure of Universal’s Wet ‘n’ Wild water park, will feature 18 slides and attractions, including the innovative Krakatau Aqua Coaster, arranged in an around a 200-foot-tall volcano. The park will feature virtual queueing using Tapu Tapu interactive wristbands, and elaborate theming inspired by the mythical Waturi island culture.

Three-park admission tickets and “Stay and Splash” vacation packages are now available through Universal Orlando for visits beginning June 1. Three-park tickets start at $244.99 ($234.99 ages 3-9) for a three day, three park base ticket; tickets including Volcano Bay cost $40 more than the equivalent two-park ticket for Universal Studios Florida and Islands of Adventure only. Pricing for single day tickets and annual passes have not yet been announced, nor have any Florida resident discounts or soft-opening previews.

For more about Volcano Bay, visit universalorlando.com/Theme-Parks/Volcano-Bay.aspx and watch these construction update videos to follow the project’s progress: