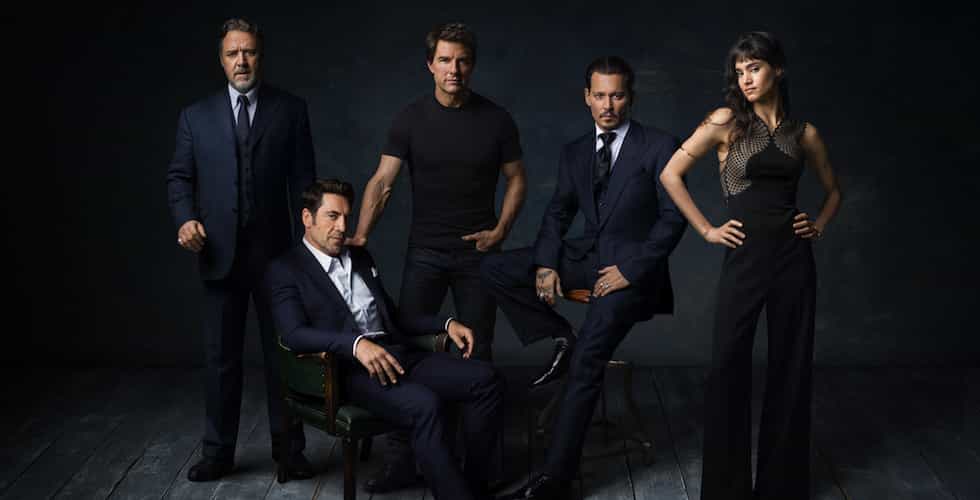 Universal Pictures has finally announced the revival of the studio’s classic movie monsters in a series of films titled “Dark Universe.” The announcement confirms the official relaunch of Universal’s iconic monsters into the modern film universe, as well as the confirmation of the initial cast. This announcement also revealed that Bill Condon director of Disney’s live-action “Beauty and the Beast,” will direct the next film installment, “Bride of Frankenstein.”

The new motion logo for Dark Universe features a theme composed by Danny Elfman, and will precede the first film in the cinematic series, “The Mummy,” which releases on June 9.

Dark Universe was created by Alex Kurtzman, who is the director and producer of “The Mummy,” as well as “The Mummy” producer Chris Morgan, who wrote “The Fate of the Furious.” Other talents joining the fold are David Koepp of “War of the Worlds” and “Jurassic Park,” and Oscar winner Christopher McQuarrie from the “Mission: Impossible” series and “The Usual Suspects.”

“We take enormous pride in the creativity and passion that has inspired the reimagining of Universal’s iconic monsters and promise audiences we will expand this series strategically,” said Donna Langley, the Chairman of Universal Pictures. “The enterprise masterfully developed by Chris and Alex will allow each subsequent chapter the right time to find the perfect cast, filmmakers and vision to fulfill it. As we launch Dark Universe with Danny’s provocative theme before ‘The Mummy’ and collaborate with a brilliant filmmaker like Bill to weave the story of a very modern woman in a very classic tale, we feel confident we’re off to a tremendous start.”

“When Universal approached us with the idea of reimagining these classic characters,we recognized the responsibility of respecting their legacy while bringing them into new and modern adventures,” said Kurtzman and Morgan. “The Studio and our fellow creative collaborators have championed and challenged us as we’ve begun to spin the web of Dark Universe. It’s our hope these movies will engross longtime fans and spark the imaginations of brand-new ones.”

From Elfman’s first score on Tim Burton’s “Pee-wee’s Big Adventure,” as well as his collaborations with cinema greats like Guillermo del Toro, Joss Whedon, Peter Jackson and more, the four-time Academy Award nominee’s creations have made him one of the most accomplished and multifaceted composers in film history.

“I grew up on monsters,” said Elfman. “Monsters were my life, and these iconic Universal monsters were almost like my family. I simply wouldn’t be the same without them. When I got the opportunity to compose a theme for the Dark Universe logo, of course I jumped at it. What could be more fun than connecting to this world that has always been so deeply embedded in my psyche? I tried to find something that was looking forward to a creative, fertile, imaginative future that Dark Universe will enter, and at the same time saluting the heritage of the tragic heroes (or anti-heroes) of my childhood.”

“The Mummy” is just the beginning of Dark Universe, as the next installment, “Bride of Frankenstein,” has also been announced, along with a February 14, 2019 release date. Directed by Oscar winner Bill Condon, and with a screenplay written by Koepp, “Bride” will be the next film in the Dark Universe, rather than a previously planned release for April 2018. The actress playing the lead role in the film has been chosen, and will be announced at a later date.

“I’m very excited to bring a new ‘Bride of Frankenstein’ to life on screen, particularly since James Whale’s original creation is still so potent,” said Condon. “‘The Bride of Frankenstein’ remains the most iconic female monster in film history, and that’s a testament to Whale’s masterpiece – which endures as one of the greatest movies ever made.”

Dark Universe will be populated by some of the most talented actors in iconic roles, as well as newcomers showing their skills. As previously announced, the current cast involved in Dark Universe include Javier Bardem as Frankenstein’s Monster, Johnny Depp as The Invisible Man, Russell Crowe as Dr. Henry Jekyll, Tom Cruise as Nick Morton and Sofia Boutella as The Mummy herself.

With every cinematic universe, there must be a unifying factor, and Dark Universe is no different. Each of the films are connected through a mysterious organization called “Prodigium.” Under the leadership of Dr. Henry Jekyll, the organization seeks to track, study, and if necessary, destroy evil and monsters in our world. Prodigium operates outside of the control of any government, and is shrouded in secrecy in order to protect the people from the knowledge of the evil that exists in the shadows – and will do anything to keep the people safe.

To learn more Prodiguim and Universal Pictures’ Dark Universe, visit welcometoprodigium.com and darkuniverse.com. The first installment in the Dark Universe, “The Mummy,” opens June 9. Check out the teaser Monsters Legacy video, and the most recent trailer for “The Mummy” below:

My tour of the Jurassic World VelociCoaster...

What you need to know for Star...