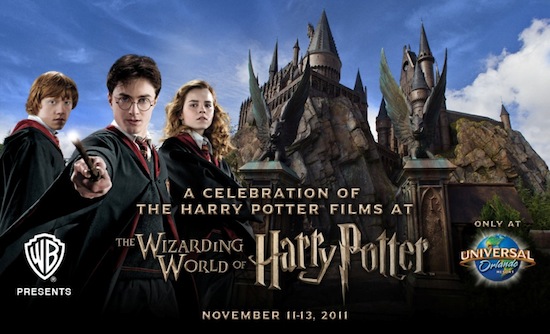 Universal Orlando is planning “A Celebration of the Harry Potter Films” for three days this November. Fans who buy special vacation packages will get to hobnob with cast and filmmakers from the Harry Potter films.

Special vacation packages, which start at $369 per person and are extremely limited, will go on sale at noon EDT this Sunday, July 31. The special event will be hosted by Warner Bros. and will celebrate a decade of movie history. The event will take place from Friday, Nov. 11, to Sunday, Nov. 13, at Universal’s Islands of Adventure, home to The Wizarding World of Harry Potter.

While all theme park guests will be able to enjoy The Wizarding World of Harry Potter during their visit, only a limited number of guests and those who buy special event packages will have access to exclusive benefits such as:

• An evening gala in The Wizarding World of Harry Potter with food, beverages, entertainment and appearances by movie cast members.
• Autograph signings with stars from the films.
• Q&A sessions with filmmakers and cast members, along with the creators of The Wizarding World of Harry Potter.
• Screenings of all eight Harry Potter films at the AMC Universal Cineplex 20 in Universal CityWalk. (Access to the screenings can be added to the vacation packages for an additional fee and can be purchased seperately.)

No specific cast members have been named yet but J.K. Rowling will not be in attendance.

The primary way to participate is by purchasing one of two special vacation packages. There will be additional ways for a limited number of people to participate. More details will be released later.

Premier Vacation Package – Starts at $699 per person
All of the above, PLUS:
• Reservation to one in-park Harry Potter cast member autograph session
• Admission to the exclusive nighttime gala event on Sunday, Nov. 13
• Breakfast at the Three Broomsticks

At the opening of The Wizarding World of Harry Potter, two special Q&A sessions were held with the film stars for the media. Here’s videos of both sessions:

Wow, not to say it´s cheap but it´s good value for money.
It´s just a shame that J.K. Rowling feels to good to take her kid and come to Universal. She is becoming more and more les likeable. Hope it turns out to be an annual event like Star Wars weekends in Disney Studios.