Universal is kicking off its first-ever Summer Concert Series with performances by some of music’s biggest talent – live at its new outdoor Music Plaza. Beginning Saturday, June 13 and running Saturday nights through July 4, the new concert series will give guests the chance to top off their day in the park with a nighttime concert.

The concert line-up features four of the biggest names in pop, hip-hop and R&B – all of whom are chart-topping, multi-platinum, Grammy Award nominees and winners.

First up is American Idol winner Jordin Sparks, whose self-titled album has sold more than a million copies. Sparks will be followed by hip-hop icon LL Cool J, with more than 15 million records sold and 20 singles on the Billboard charts. Then comes British songstress Natasha Bedingfield, with album sales of more than 10 million – and Rock ‘n Roll Hall of Famers, The O’Jays. 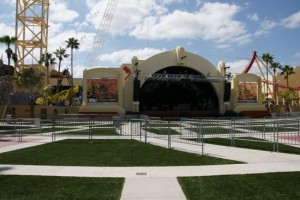 The concert series spotlights Universal Orlando’s new home for hit music – the Music Plaza. Located in the heart of the Universal Studios theme park, the Music Plaza debuted during Universal’s Mardi Gras event earlier this year. It is a state-of-the-art outdoor music venue designed in the spirit of one of the most famous outdoor concert venues of all-time, The Hollywood Bowl. The Music Plaza features a 2,400-square-foot performance stage, a 15,000-square-foot viewing lawn and two 20-foot-tall projection screens so that everyone can see the show.

“Our Music Plaza has quickly become Orlando’s perfect place to enjoy great music outdoors,” said Jim Timon, senior vice president of entertainment for Universal Orlando Resort. “Our Summer Concert Series will continue that tradition – and be an amazing experience for everyone from dedicated music fans to families wanting a great way to end their day in the parks.”

Stars in the Parks: Kenny Rogers at SeaWorld

Yea!!! its gonna be rock! im going to see Jordin Sparks i want this month off!