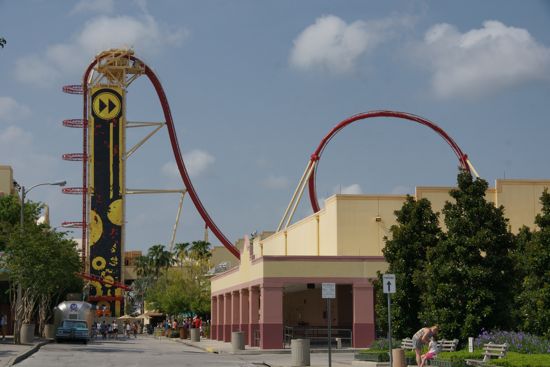 The new Hollywood Rip Ride Rockit roller coaster at Universal Studios may finally be opening soon after a long delay. The ride was open for all Universal employees to ride last night. And if all went well with that test, it may have a soft opening for park guests as soon as 2 p.m. today.

Orlando Attractions Magazine reader Mickey from MagicCityMayhem.com works at the Hard Rock Cafe and was able to ride it twice last night. Here’s his report:

I pulled in to the Ikea parking lot at about 6:15 p.m. to buy some furnishing for my new place. Before I turned off my car, I received a text message from my sister, who works at Blue Man Group, that Hollywood Rip Ride Rockit would be opened until 9:30 p.m. for Universal Orlando team members. At that time, I promptly headed towards Universal Orlando without a moment to lose.

They didn’t let us enter using the normal queue entrance. They made all team members go through the backlot/soundstage area. The locker rentals were free for a three and a half hour window. They were strictly enforcing “NO LOOSE ARTICLES” on the ride. They even wanted me to put my ball cap in the locker!

I rode the first time by myself and waited about 25 minutes. While waiting, they show you videos on how to pick your music once you’ve finally boarded the vehicle. They also go through all the categories and show you some clips from the featured songs. There are a ton of fans and water misters in the staging area, and even though I was waiting in the evening time, it was “cooler” in the line.

I picked Sabotage by the Beastie Boys as my first song, and it really worked well with the ride. It was tall, it was fast and it wasn’t too loud. Dare I say it … I may like it more than the Rock ‘n’ Roller Coaster!

There are kiosks at the ride exit where you can look up your own picture and video. The on-ride video wasn’t functioning for the preview unfortunately. Also, several potential riders were turned away because the ride vehicles couldn’t accommodate them. Hopefully Universal puts a sample car at the front of the attraction to avoid people waiting the entire line to get to the front and be turned away. Also, if you are too tall, you won’t be able to ride! Lots of restrictions, but after riding it, I can see why. It is very intense, and I cant wait to ride it again and again!

Mikey was also Twittering (@justmikeyhrc) about his experience and described the ride as “More thrilling than Manta, but a different experience. Definitely more intense than Revenge of the Mummy.”

We’ll be heading to Universal later today to see if the ride is running and open to the public. Check our Twitter account for updates. (@attractions)

For now, here’s one more look at what you’ll see during the ride:

today the park had a soft opening and i was the first non member to get on the ride at 5:50 pm. The ride was very awesome and i got to listen to stronger by kanye west on it.