Universal Studios Hollywood is ushering in the “Year of the Pig” as the park celebrates Lunar New Year with special offerings from Feb. 2-17. 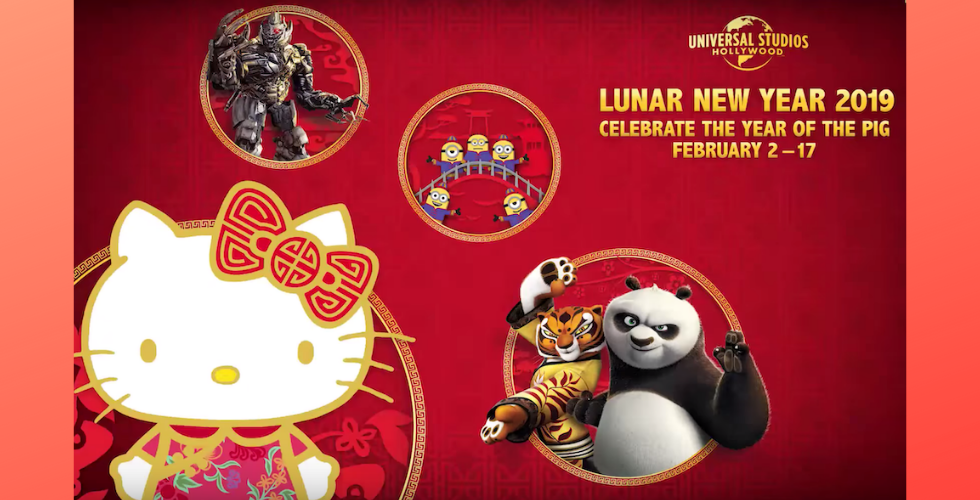 Celebrate the Year of the Pig at Universal Studios Hollywood!

UPDATE – 02/08/19: Traditional dance and martial arts performances have been added to this year’s event! Check out the schedule below:

The Lunar New Year traditions will take place in Universal Plaza, found at the heart of the theme park. The area will be decorated with customary red Chinese lanterns and plum blossom Wishing Trees, along with the 12 zodiac animal signs accompanied by their symbolic traits.

The centerpiece of the Lunar New Year offerings will be DreamWorks’ Kung Fu Panda Jade Palace Performance Stage, which will feature the Dragon Warrior Training Show based on the film franchise. This experience will offer an interactive martial arts demonstration performed by Master Po and his friends. The event will also offer lessons from animators on how to draw Po and the Furious Five as a special souvenir.

Mr. Ping’s Noodle Shop will be back by popular demand to serve up culturally-themed food like Po’s Dumplings, Dragon Warrior Bao, Oogway Eggrolls, and Secret Ingredient Stir Fry Noodles. Mr. Ping himself will even be there to interact with guests and take photos.

Global pop icon Hello Kitty will celebrate Lunar New Year by stepping out in style with her signature red bow and special holiday attire. Hello Kitty will be able to meet guests at the Hello Kitty Shop inside the new Animation Studio Store.

Another unique meet-and-greet for Lunar New Year is a Mandarin-speaking Megatron, who will greet guests at the entry to the festivities. Illumination Entertainment’s Minions will also join in the fun as they dress up in brightly-colored traditional Lunar New Year attire.