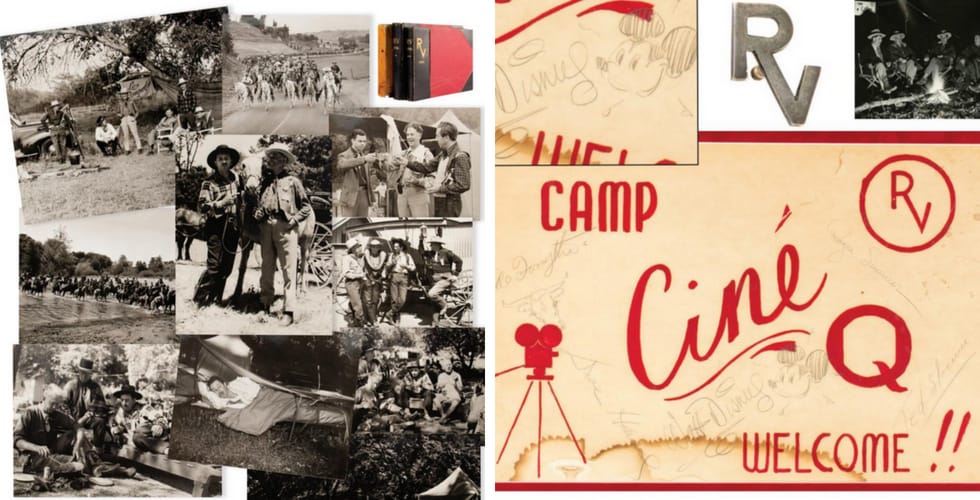 Van Eaton Galleries, located in Sherman Oaks, Calif., has announced a new auction event that includes never-before-published photos of Walt Disney’s personal life, along with a 1953 construction plot plan that he drew on to show the boundary for Disneyland.

The “A Brief History of the Walt Disney Studios” auction will be held on July 7, 2018, and will offer some of the most closely-related artifacts to Walt’s life that have never been offered for public sale.

Highlights of the auction include a complete set of personal photos of Walt and the Rancheros Visitadores social club. The photo shows Walt riding on horseback and camping during one of the club’s yearly trips through the Santa Ynez Valley. The set includes never-before-published shots of Walt, who took part in these trips in the late 1930s into the 1940s.

In addition the auction will also offer a Rancheros Visitadores Camp Site sign, personally signed by Walt himself, accompanied by his personal drawing of Mickey Mouse. This hand-painted sign was for Walt’s camp site, “Camp Cine Q.” 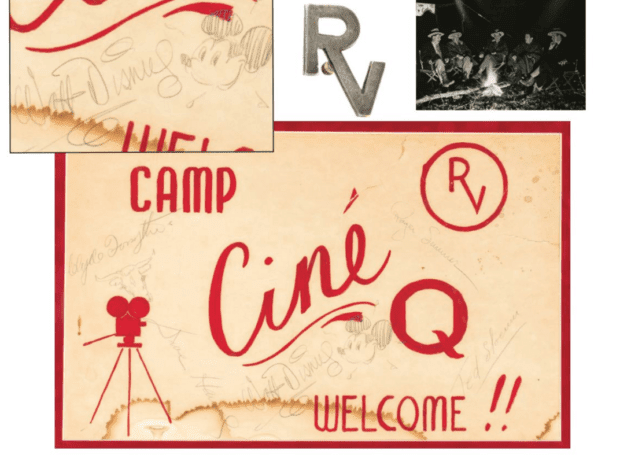 The signed Camp Cine-Q sign, featuring Walt’s signature and a Mickey Mouse drawing by him.

The sign features the signatures of several of the club’s members, like American artist Victor Clyde Forsythe. Original drawings of Mickey made by Walt are some of the most sought-after Disney artifacts.

“The ‘A Brief History of the Walt Disney Studios’ auction doesn’t just tell the story of the Studio, but it tells the story of Walt and his team of talented artists and individuals who helped build the company,” said Mike Van Eaton, co-owner of Van Eaton Galleries.

“We consider this one of the rarest opportunities we have had to show the world a side of Walt Disney that few have ever seen, through personal photographs and personally-signed or hand-drawn items. Many of these items have never come to auction before and are among the only such examples of these items that we have ever seen. To say we are excited about this auction is an understatement. Anyone who recognizes the incredible value of such items from Walt’s personal life will understand how significant this auction is.”

A plot plan for Disneyland is one of the rarest and most historically important items to be offered in this auction. In August 1953, shortly after purchasing land in Anaheim, Calif., Walt took a grease pencil and drew a triangle on the plot to represent where he wanted Disneyland trains to run, creating the boundaries for the park and the beginning of Disneyland.

This original drawing by Walt is the earliest known appearance of the shape of Disneyland and its location, and also represents Walt’s personal involvement and input in the creation of his park. 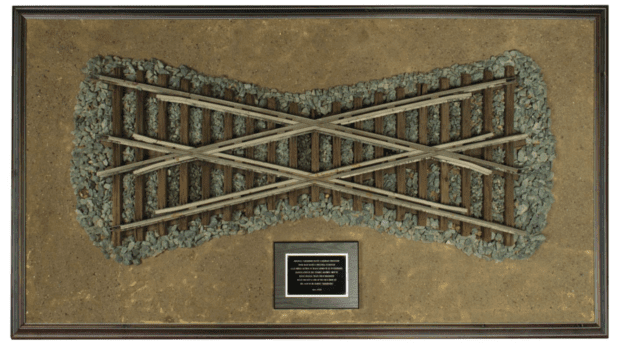 Walt Disney loved trains so much, he had one built in his backyard.

Another item going up for auction is a piece of railroad track from Walt’s own backyard railroad, as well as an extremely rare “Laugh-O-Gram” stock certificate from Walt’s early animation studio, signed by him.

To take a look at other offerings in the auction, and to purchase the exclusive catalog, visit vegalleries.com.