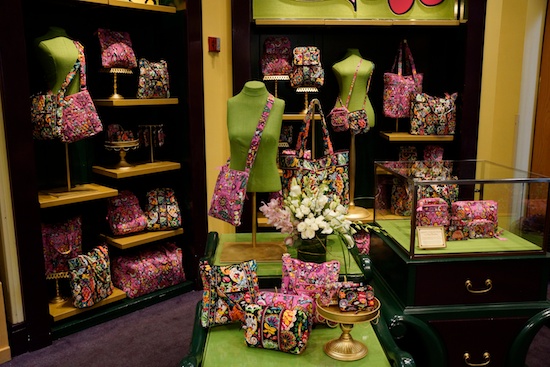 Disney and Vera Bradley will be releasing a new collection of Disney-inspired styles in the World of Disney store at Downtown Disney Marketplace.

There are two designs being released, a pink one titled “Just Mousing Around,” and a black one called “Midnight with Mickey.” There are several products available, with prices ranging from $15 for a Zip ID Case to $99 for a Vera Backpack or Large Duffel. The Disney Collection by Vera Bradley was created especially for Disney Parks. The collection will also be available on the Disney Parks online store starting in late October and at Disneyland later this fall.

Vera Bradley Co-founder and Chief Creative Officer, Barbara Bradley Baekgaard, will be in attendance meeting guests from 8 to 9:30 a.m. on Sept. 21, 2013 during a special event at World of Disney. Wristbands to meet Barbara will be distributed on a first come, first serve basis to guests who make purchases. Parking at Downtown Disney will be open starting at 3 a.m. with guests able to start waiting in line outside World of Disney at 4 a.m.

More details about the event can be found on the Disney Parks Blog.

We’ll have a segment about the Disney/Vera Bradley Collection on the Sept. 26, 2013 episode of Orlando Attractions Magazine: The Show.

I just returned fromThe Disney Village. I purchased a Midnight mini hipster. Be careful if ordering on line because a lot of the items didn’t have Mini or Mickey on them because of the way they cut the fabric. The customers were not allowed to pick & choose through the items. The items were brought to you and then you’d ask well where’s the mouse. Then they’d bring something with half a mouse until finally they brought something nice. I’m sure that stuff will end up in an outlet store. It was disappointing & thought the customers deserve better.

I am disappointed that the people in northern Indiana who supported the VB line from the onset have to wait until the end of October to make a purchase…and then, only if available. I understand the control issues when dealing with The Disney Company. Also surprised that they could not control and assure the placement of the graphics on the product.

I went to purchase a backpack in Midnight and the ones that I was given to look at did not have the Mickey/Minnie where you could see it. Very disappointed so I did not buy anything. This is going to be a large issue for these two patterns. I would not order on line. I would want to pick and choose.