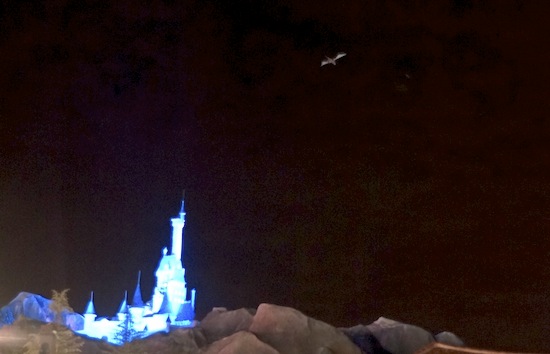 After much online discussion and various reported sightings, a fire-breathing dragon finally appeared for all to see over New Fantasyland at the Magic Kingdom. We were there to catch him with our camera. Take a look:

His appearance was during a private party for media, travel agents and others on the night of Dec. 5, 2012. Disney called it a special, one-night appearance, but everyone we talked to at the party thought it was pretty cool. So keep an eye to the sky on your next nighttime visit to Walt Disney World. You never know when he’ll come out of hiding again.

This is awesome!! The only sad this is… I just found out this dragon isn’t real :'(.

Another one of a kind experience by Disney. I hope the dragons will come out more, mabe in the nightly firework show.

How did they do that?!

Why in the world would they do something THAT amazing and only do it once? This should definitely become a regular event!!