Video games and technology will be showcased this weekend at Otronicon 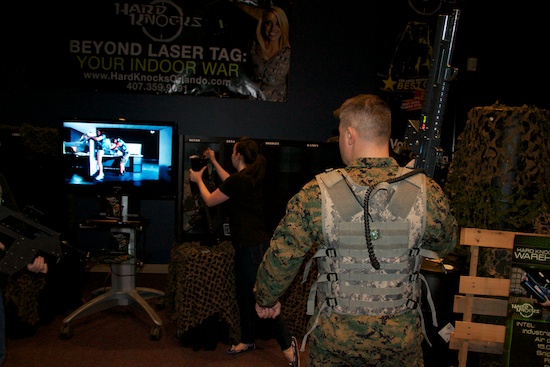 If you have a passion for Rock Band, simulators and video games in general, you’ll want top visit the Orlando Science Center this weekend for their 6th annual interactive technology expo – Otronicon. This event takes the world of video games and transforms them into true gaming experiences from January 14 to 17, 2011.

There will also be classes in video game creation, as well as exclusive peeks at simulators created by experts in the field. They’ll also feature the first ever demonstration of how EA Sports’ popular Virtual Playbook technology is impacting the way we view sports of all kinds. This is the one weekend when the Orlando Science Center leaves its doors open from 10 a.m. until midnight.

Otronicon is the place to play videogames in nearly every format, from classic arcade games to current platforms like Wii, Kinect and Move. Guests can also try out heightened experiences like playing TRON: Evolution – Battle Grids on the massive eight-story domed screen of the Dr. Phillips CineDome or acting out their rock star fantasies by playing Rock Band on a concert stage before a cheering crowd.

Guests can follow the link from videogames to simulation and discover how this technology is used in training. Experiences include real-world military flight simulators from Lockheed Martin and others and cutting edge medical simulators from Florida Hospital and University of Central Florida. The simulation area at Otronicon showcases the latest technology – some rarely seen by the general public. Experience what it’s like to land on the deck of an aircraft carrier or perform emergency medical procedures.

Learn skills from industry pros and hear about career options in this fast-growing high tech industry during workshops and other opportunities. Industry professionals from Lockheed Martin, EA SPORTS, Lockheed Martin, Florida Hospital and others will also be on hand to chat with guests on how they can turn their interests in interactive technology into a new career.

• Experience the virtual world through Virtusphere. Wear a wireless, head-mounted display while you walk or run immersed in a virtual environment set within a 10-foot hollow sphere that rotates freely in any direction according to your steps.
• Local videogame company n-Space will visit Otronicon to provide behind-the-scenes tips on how to play their new Tron videogame and emcee game-play on the giant 8-foot screen CineDome on Saturday.
• After 7 p.m. on Friday and Saturday, enjoy Otronicon After Dark with themed nights including a “Zombie Night” on Friday with zombie games, costumes, movies and more and Cocktails & Cosmos on Saturday with cash bars, live music, deejays and a variety of food. Otronicon After Dark offers adults an opportunity to engage in more mature-content during the event.
• Three bands will be performing at Otronicon at scheduled times, including during Otronicon After Dark events. This music is inspired by videogames and will be played live by the bands, The Rules, Jeux On and BFUNK20XX.

Plus:
• Florida Hospital hosting Medical Sim City with demonstrations of the innovative DaVinci robot along with patient simulators, echocardiograms and a virtual autopsy.
• Lockheed Martin hosting the Military Simulation area with cutting edge flight simulators, driving simulators, student built robots and other great military demonstrations.
• Guests will have the opportunity to pilot through a maze with robots brought by PEO STRI.
• Star Wars 501st Imperial Legion will appear at Otronicon on Saturday in full Star Wars dress.

Otronicon is open to the public for four full days. Tickets are $17 daily for adults and $12 for kids (ages 3 to 11). The Orlando Science Center is located at 777 East Princeton Street in downtown Orlando. Visit otronicon.org for more information.