Video, Photos: Behind the scenes of balloon handling for Macy's Holiday Parade at Universal Studios 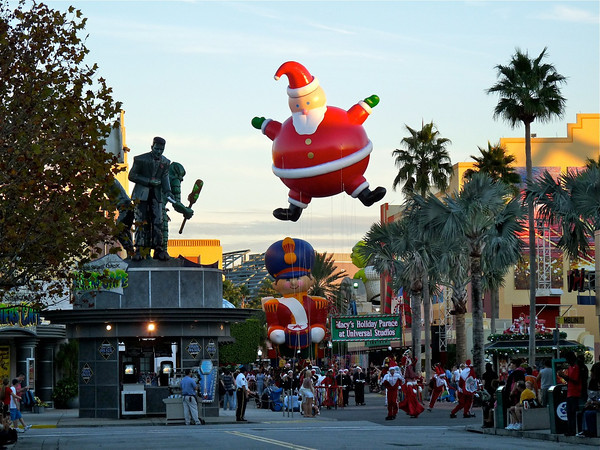 Since 2002, Universal Studios has partnered with Macy’s to bring elements of the famous Macy’s Thanksgiving Day Parade to Orlando during the holiday season. In addition to shipping down memorable floats featured in the annual New York parade, Macy’s brings several of the giganic balloons that have made the parade so popular over the decades.

But guests visiting Universal Studios have a chance to do much more than simply watch the parade pass by. Each day, park guests have the opportunity to actually become “balloon handlers,” helping to guide inflated characters through Universal’s streets. On Dec. 15, I (along with Orlando Attractions Magazine editor Matt Roseboom) had a chance to take part in leading Universal’s and Macy’s newest balloon, Big Man Santa, around the parade route to see what the balloon handling experience is all about.

Before I give you my impressions, here’s a summary video featuring interviews with Universal show director Michael Aiello and design director for Macy’s Parade Studio Jerry Ospa as well as a look inside the backlot building where they park the inflated balloons and a bit of balloon handler training… and a glimpse at myself and Matt as balloon handlers:

In short, being a balloon handler is a lot of fun. The “training” process begins as guests are each given a jumpsuit, gloves, and a Santa hat. Jumpsuits come in a variety of colors, depending on the balloon.

As you saw in the video above, we were assigned to Universal’s newest balloon, Big Man Santa, which apparently requires black jumpsuits. While they’re not the best color for dealing with Florida’s sun (yes, it’s hot even in December here), we lucked out with enough cloud cover to keep us cool. The padded gloves were even welcome as holding onto the “bone” (as they call it) attached to the balloon’s string would be horribly uncomfortable without them. And, of course, the Santa hat adds a little festive style to the otherwise bland costume. 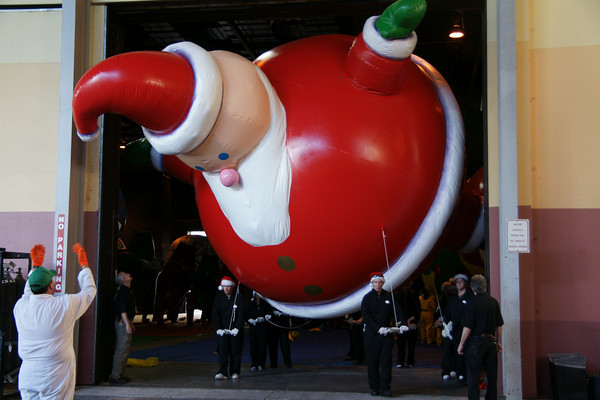 Emilio, a veteran of both Macy’s Holiday Parade at Universal Studios and the “real” Macy’s parade in New York, was our pilot for the day. After whizzing through a couple minutes of hand signals and safety tips, Emilio told us to each pick a spot on the balloon and, before we knew it, we were guiding Big Man Santa out the door.

Lifting Santa above our heads was as simple as unwinding a bit of string. After all, he is filled with helium. After a couple minor bumps and scrapes along the opening, we navigated our way down the street and around few corners. Before heading out into full view of guests, Emilio taught us a couple of balloon tricks, including jogging in a circle to spin the balloon around. This was a skill that ultimately proved to be too complicated for us out in the parade, as each time we received the signal to begin the spin, half the group ran in the wrong direction. I imagine Big Man Santa was a bit dizzy after we were through with him. Fortunately for us, our videographers (Matt’s family) didn’t catch these mistakes on camera. Oh darn. Instead, you only get a still image of us appearing to spin like pros:

Spinning snafus aside, I think we did a fine job entertaining Universal’s guests. Being in the back of the balloon, my job was rather easy. I wasn’t pulling the balloon as much as making sure it didn’t fly away. After signing the required agreement that stated I was able to handle 100lbs, I was surprised at how little work I was doing during the parade. However, Matt said he was a bit tired after the roughly 45-minute walk through the park was over – but I hadn’t even broken a sweat. I think his position along Santa’s side was a tougher one than mine. I also was told that if the winds pick up or rain rolls in, navigating the parade can be a much more exhausting experience.

The hardest part for me was keeping my eyes on Emilio’s hand signals. Instead, my attention tended to wander to the hundreds of guests watching us (okay, watching the balloons more than us). And yes, I was watching the balloons on occasion too. At its highest point, Big Man Santa was somewhere around 45 feet above our heads, which is quite a sight to see from directly underneath.

This was my first experience being in a parade of any sort and it was a great one. I highly recommend that any Universal Studios guest meeting the requirements (minimum weight of 125 lbs and able to lift 100 lbs) give balloon handling a shot.

Macy’s Holiday Parade began this year on Dec. 5 and runs through Jan. 1 (and will likely return again in Dec. 2010). Guests interested in taking part in balloon handling for the parade should keep an eye out for Universal Studios employees with clipboards wandering around the Rip Ride Rockit area at around 2:30 – 3 p.m. Passholders can also sign up in advance.

Here’s a video of more of Macy’s Holiday Parade (shot on a separate day) followed by a photo gallery from our balloon handling experience:

What would you ask The Grinch? The mean one will answer your questions today on Facebook