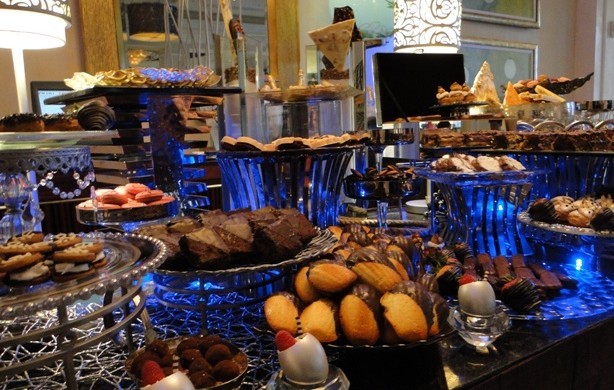 The Food and Wine Weekends at the Waldorf Astoria and Hilton Orlando Bonnet Creek might be overshadowed by Epcot’s International Food and Wine Festival, but food connoisseurs should definitely add this event to their culinary plans, too. For seven weekends until Nov. 9, these properties showcase the best of their best, and you’ll definitely want to indulge.

“For the past 19 years, Disney has done an amazing job of building their Food and Wine Festival at Epcot,” said Peter Kacheris, managing director of Waldorf Astoria Orlando. “As the festival has grown, so has the public’s appetite for culinary-focused experiences. We’ve created our Orlando Food & Wine Weekends to highlight our own world-class culinary team while we complement the Epcot festival.”

The third annual Food and Wine Weekends are a little different than Epcot’s fare. Events only take place Friday through Sunday, and most need to be reserved ahead of time. Almost all events occur during the dinner hours.

During an overnight stay at the Hilton Orlando Bonnet Creek, I attended as many events as I could. Upon check-in, we were welcomed with the Delights and Flights event in the Hilton lobby. A cozy enclave surrounded by wine barrels welcomes guests in the early evening with drink tastings. On Friday, beers from Florida were showcased, along with pretzel bites. On Saturday, it was an Italian wine flight.

No time to overindulge though, because we had reservations for A Taste of Waldorf Astoria, a seven course meal held in the resort’s Bull & Bear Restaurant. The seven courses highlight famed entrees from Waldorf Astoria’s properties around the world. Wine pairings are also available and guests are in good hands with Michael Pherai, Captain of Bull & Bear who can expertly recommend the best accompaniments throughout your meal. It is truly an international feast, not just with small bites, but large portions to savor.

A Taste of Waldorf Astoria is a specialty menu to indulge in at Bull & Bear on Friday and Saturday nights. The menu is presented in a leather bound book with a pop up flashlight attached to read in the dim lighting of the Bull & Bear, which is reminiscent of an old gentleman’s club, with dark tones and subdued lighting.

The first course was an impossibly light amaranth cracker, which the chef makes just like a meringue and covers with the ancient grain. On top was a thin slice of bison topped with Beluga Caviar. The appetizer from Rome was unusual and amazing.

Next, a soup of coral lentils with a surprising spicy kick, from United Arab Emirates. Then a ravioli of langoustine and lobster steamed in Riesling, from the Trianon Palace in Versailles, France.

The taste of New Orleans arrived with a filet of red fish and oyster poche on thick and creamy risotto base with peppers. From the Waldorf Astoria Shanghai came a green curry organic chicken served with crispy millet and green papaya chutney. Once again, the unusual grain stood out as a favorite, and the spicy tones of the fabulous green curry chicken really were strong when paired with an accompanying wine.

After such a long and heavy meal, you wouldn’t think that more food would be possible, but right outside the Bull & Bear was the Bar du Chocolat, a decadent smorgasbord of everything and anything chocolate.

The display of chocolate was a multi-tiered celebration of cookies, tiny pies, candies and eclairs. Guests can pick and choose which treats they want to indulge in, and champagne is also available to purchase for pairing. The homemade Kit-Kat bars were decadent, while the chocolate napoleon and chocolate filled mini eclairs certainly did not disappoint, either. Everything was so good, but I do highly recommend allowing enough time between dinner and the Bar du Chocolat so that you can thoroughly enjoy each. 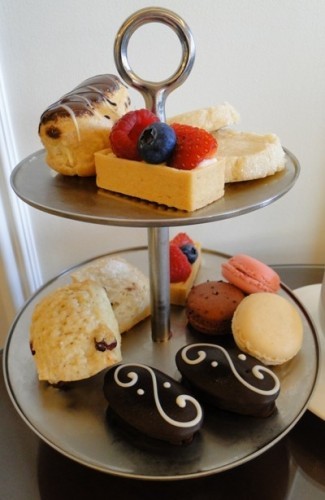 The next day, we stayed at the Hilton Orlando Bonnet Creek until mid-afternoon so we could indulge in Royal Tea. Served in the Peacock Alley, tea is a casually elegant affair among the normal activity of the lobby. Reservations must be made ahead of time for the tea so that the food can be prepared. We had a cup of tea, along with a platter of five different tea sandwiches and another platter of desserts, including chocolate cakes and scones. Live piano music created a restful atmosphere that served as the finale to our Food and Wine weekend.

In addition to Taste of Waldorf Astoria, two more tasting menus can be found at dining locations for dinner. Il Cibo Della Vita at La Luce by Donna Scala at the Hilton has five course meals. Each night has a different menu. Friday night’s menu includes butternut squash soup, mozzarella and tomato bruschetta, risotto with scallops and wild mushrooms, lamb meatballs and cannoli.

If you’re planning on a Food & Wine Weekend experience, here are some helpful tips to keep in mind. Having a room at either the Waldorf Astoria or Hilton Bonnet Creek is a great idea after indulging in the meals. It’s so nice to just walk back to the room and relax. Both properties are connected by an inner walkway so events can be enjoyed at both. Room packages, including resort credits, are available for Food & Wine Weekends. Complimentary transportation to the theme parks is also included.

Taste of Waldorf Astoria is $110 per person, not including tax, gratuities or wine package. Il Cibo Della Vita’s specialty menus are a la carte, and prices range from $9 – 34. Pea Ringu is $35 per person. Royal Tea is $30 per person. Visit waldorfastoriaorlando.com/Food-Wine for more information.