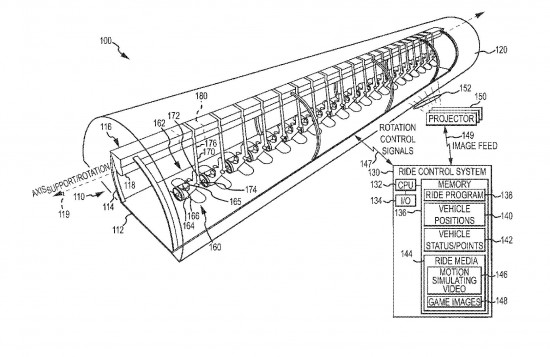 Walt Disney Imagineering is always coming up with new ideas to push the envelope in terms of theme park attractions, and from their new ride system patent, they’re looking to do it again.

News site Disney by Mark has shared with us a look at a new ride system that WDI has recently patented. The ride was developed by Disney Imagineers David Crawford and Ed Nemeth. It’s called a Twister ride system and it’s something never before seen at any theme park.

The ride vehicles are attached to a 360 degree axis and rotate around it inside a tunnel with video being projected on the walls, giving riders a sense of traveling forward in their vehicles. The rotation could either be pre-programmed or guests may determine their rotation and movement with buttons or a joystick. The ride could also incorporate some game elements, with riders reacting to what they see on the screen and could be adjusted to provide a family ride or high thrills.

This is a new take on the typical spin ride like Dumbo which only offers up and down control. The addition of video screens and gameplay offer a unique experience each time you ride. The patent gives an example:

… a trailing vehicle may be able to shoot/strike the leading vehicle in front of them so as to be able to momentarily disrupt the operation of the vehicle such as by altering their rotation mechanism to cause a quick drop (or otherwise having their operations affected by a trailing/chasing vehicle). In other cases, a scoring game may be provided in the twister ride system in which points are gathered by lining up with visual targets provided in the projected or displayed media along the adjacent projection surfaces or tunnel-like housing walls as their vehicle “passes” through the displayed/projected environment. 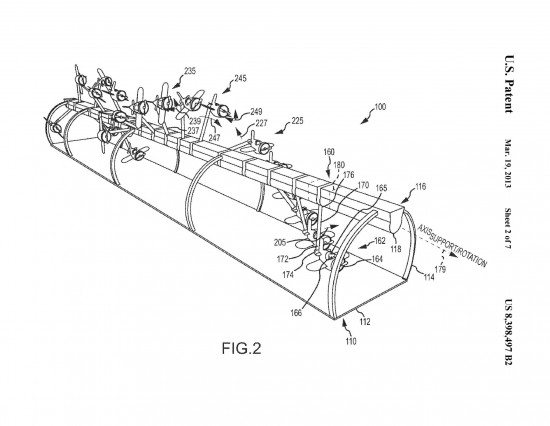 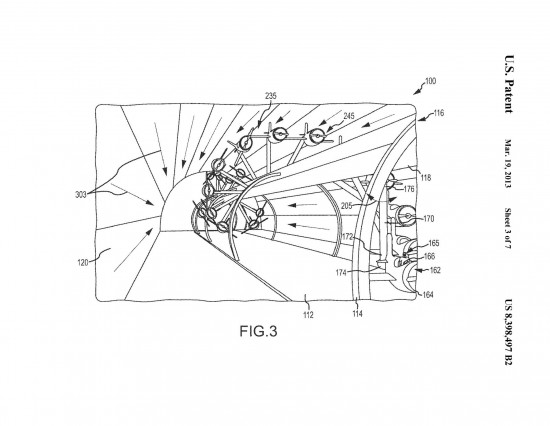 According to site Editor Mark Hickson, a former Imagineer, the ride is to be themed to the upcoming Disney movie “Planes”, but it’s unknown which Disney park it may appear in. To read the full patent and see more photos, visit DisneyByMark.com.

Movie Review: Iron Man 3 more about the man than the suit, but that’s not bad

Looks nice but I guess you see a lot of the ride mechanics and that doesn’t help to emerge the rider in the story. Thats what I like about rides like test track or the potter ride at IOA. The last one even never shows you anything but the bench you are on.
Lets see what Disney is doing with this when/if the planes movie is a succes (not so sure about that).

Wow!!! I really hope that this comes to Hollywood Studios. They need more rides.

With Disney now having the rights to Lucas films One would think they’d be considering bringing the Disneyland Indiana Jones ride attraction to Orlando. Makes sense